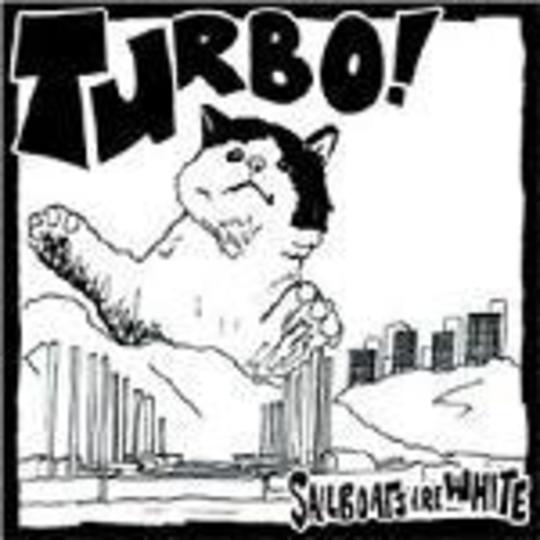 So there’s this new band signed to Poptones and they play guitars and... no wait, come back! Did I say play guitars? My bad... they pummel guitars. They play guitars in the same way that lawnmowers ‘play’ grass. And they’re from Hamilton in Canada rather than some grotty hovel in London. Plus, they cite The MC5 as an influence by actually taking their hardcore ethics into their music rather than by just wearing a T-shirt. Oh, and they’re also an electro band, although only in the same way that The Locust are an electro band – i.e. they’ve got a synth but it probably weeps in fear before it gets all the scuzzed-up anti-riffs torn out of it. I know, I didn’t think McGee had it in him either.

Sailboats Are White, then, are a band that it’s easier to stare and gawp in awe at than run away from, and they're all the better for it. Which is why their album Turbo! comes across not like a Goodies tribute act, as the hastily-scrawled scene of a giant cat invading a bustling metropolis on the front cover suggests, but rather like a cross between Big Black, Martini Henry Rifles and falling into a volcano full of piranhas. Granted, their brand of synth-guitar bludgeonry doesn’t always work, especially when it foolishly lets the pace drop – the rage in ‘Mutiny Disease’ sounds a bit forced amongst the distorted fury of the rest of the album, and their extended version of the “I love you, you love me” song from Barney The Big Heinously Annoying Purple Dinosaur that closes the album is worth a miss. But when they’re getting rock and roll right, they’re getting it gloriously wrong.

For instance, rather thrillingly for yours truly, opening track ‘Congratulations On The Goddamn Cherries’ bursts into a bastard amalgamation of noise after a minute, like the disco-punk of Carter USM fronted by the ‘singer’ from Cutting Pink With Knives. Fucking. Yes.

So, for the most part, Turbo! is a violent, virile, viral racket that sounds in some places like Trencher produced by Nick Zinner (‘It’s Exactly Four Seconds From Here To The Door, I’ll Give You Two’), at others like electroclash had it been in love with shredding (‘S.A.W.’), and more often like a bath swallowing a drum machine coupled with Andy Falkous swallowing a microphone (‘Hand It To The Devil’ – don’t try this at home, kids!). But overall, SrW sound like any music would if you channelled all your fury into it, thwacked it out of yr instruments as hard and fast as possible yet still wanted people to dance along.

And you will dance, oh yes - resistance is useless.

Songs From The Lodge