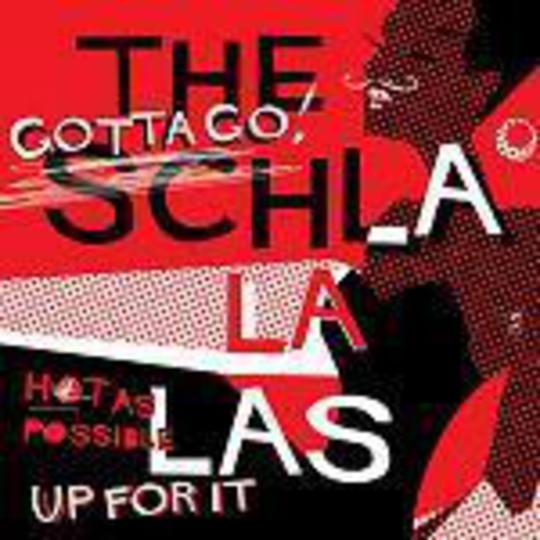 Ooh, just when I thought straight-up rock and roll with all the naivety, sugar-sweetness and plain fun left in was an endangered species, this little set of gems rears its impeccable head.

Granted, The Schla La Las are hardly the most adventurous and, let’s face it, cliché-free of guitar-slinging rock and roll gangs. But why go out exploring the sonic wilderness when the party’s just starting to kick off indoors?

_ “You’re gonna love us so much you’ll wanna blow your load”, they insist on _‘Gotta Go’. Well, let’s not get that excited, but this rama-lama wham-bang thank-you-glam attitude sure is infectious, and acts as a threat to whatever town they’re dragging their rock and roll circus into as well as a rallying call for those expecting the sex and drugs bit, too. Some concepts evidently never grow old. “Hide away your first-born son”, they warn, and in under two minutes you get the exact impression why.

Better, though, is B-side ‘Hot As Possible’, which benefits from being a lot like ‘My Best Friend’s Girl’ by The Cars, only replacing the effete whinging with a metric tonne of winsome, bittersweet oestrogenic longing and cherry-red harmonies and hence isn’t a load of rubbish. Then, of course, there’s the jovial fight over the lad in question between the members of the band that cuts into the big bubblegum-overload chorus as the big finale and everyone goes home realising the world is full of coy glances.

But wait! There’s still ‘Up For It’, the sort of song Barbie would have written if she was into grunge and alcopops. Which, come to think of it, she probably was. Anyway, it rattles along in its jovial energy-over-ability snog-pop way and reaffirms in this reader’s mind that the garage is the church and rock and roll is the preacher, daddy-o.

When Your Heart Stops Beating