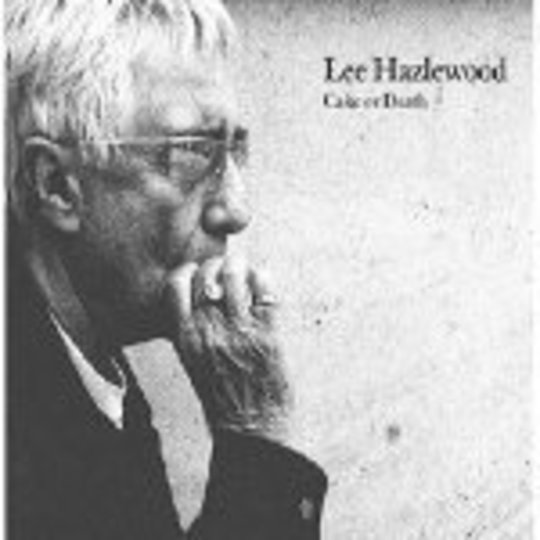 Unlike some new band forcing their way in, or another hoping that their fifth will still shift sufficient numbers to keep the kids in private education, Lee Hazlewood didn't need to make this album. Having put out his first single in 1958 and retired at least twice, before having the children - in the shape of Pulp, Sonic Youth, Nick Cave etc - beg him to come out to play, this album is his way of doing what Johnny Cash did towards the end of his life, namely, tying up the odds and sods to leave his swansong.

But Hazlewood isn't Cash; his outlook is wholly different. _Cake Or Death_ is a bit of a scrapbook really; a time capsule to enable those who remain once Hazlewood's gone to get the measure of the man. For a gent of 78, his voice is in great form. It still drawls with all the suggestion of an unseen but twinkling eye, but it's the songs themselves that sell this record.

_'Nothing'_, the first song, is so lounge and pert but overflows with gentle sophisticated humour. How can you chat someone up with whom you don't share a common tongue? The spunky second track could be some 1960s show tune, but the lyrics betray communications home from American soldiers in Iraq (Hazlewood himself served in the US Army during the Korean War). Already, this album is delivering nothing but the unexpected.

As with all scrapbooks, the compiler is king. By way of honouring a promise, a certain Tommy Parsons in introduced as if from stage left, who then takes the entire vocal on _'She's Gonna Break Some Heart Tonight'_. This same autonomy allows him to pull off the album's biggest indulgence for the cover version of his classic _'Some Velvet Morning'_ (used in the Morvern Caller OST ), here co-attributed to his granddaughter, 'Phaedra and Grandpa'. Surely a schmaltzy step too far, but what's it got to do with us?

_'Fred Freud'_ is a touch of individual genius. A cranked-up and pompous Viennese (natch!) waltz frames three verses where the eponymous hero butts in, intrusively, to diagnose neuroses. The cure every time is a different classical composer, until chaos destroys all at the close. Brilliant stuff.

Pick this up for your folks for Christmas and you can't do wrong, but when you do, make sure you take a burn for yourself first.

Ban This Filth! at The Cow, Cambridge, Fri 01 Dec