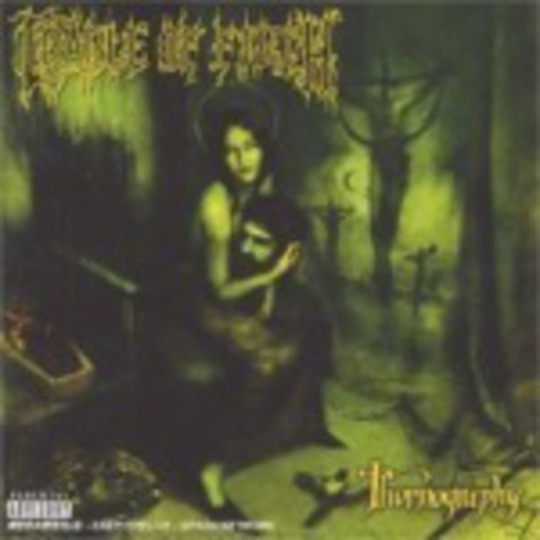 Everyone knows who *Cradle Of Filth *are. They’re… that metal band… the ones that made that 'Jesus is a cunt' t-shirt. Blasphemers! _Thornography _is the seventh album from the British black metallers and promises to be a more diverse beast of a record.

Instead of a varied yet still tasty main course, however, The Filth have instead provided a selection of dark metal tapas. Some of which don’t altogether complement each other.

CoF have always pushed every envelope in every direction with their wonderfully ghoulish imagery brought to life in their scintillating live shows - and that famous and hilarious t-shirt - design helping to alienate a whole generation of goths across the world. This is what’s missing from this record.

There is no real sense of adventure found here. As a standard metal album it is fine, but more is expected from this band. Apart from the gloriously brooding opener of ‘Under Pregnant Skies She Comes Alive Like Miss Leviathan’, the symphonic splendour that is so closely associated with the band is sadly lacking.

While the performances are absolutely fantastic, with second track ‘Dirge Inferno’ _providing some wonderfully twisted Maiden-style riffs that thunder and plunder, there is something lacking from songs like _‘Foetus of a New Day Kicking’ _and _‘Rise of the Pentagram’. Songs like these should not have any of that tinny, waspish feel and demand a thicker edge production-wise, especially when you see the pedigree of Rob Caggiano and Andy Sneap involved.

The earlier operatic swathes of ‘The Byronic Man’ _are a surprise hit. A song that many a fan surely dreaded due to the much-vilified Ville Valo of His Infernal Majesty harmonising alongside Dani Filth’s camp screeches and barks. This track is a stampede of black metal majesty worthy of inclusion on any recent Filth record, but is also a rare treat on Thornography_.

The frightening industrial cover of Heaven 17’s _‘Temptation’ _provides some light-hearted relief at the end of an album which contains few moments of true inspiration, and even fewer that are truly inspiring.

Cradle Of Filth have created so much genuinely great metal in the past, with such great imagery and concepts, that they have rendered this album instantly obsolete. _Thornography _is an album only for Cradle completists.