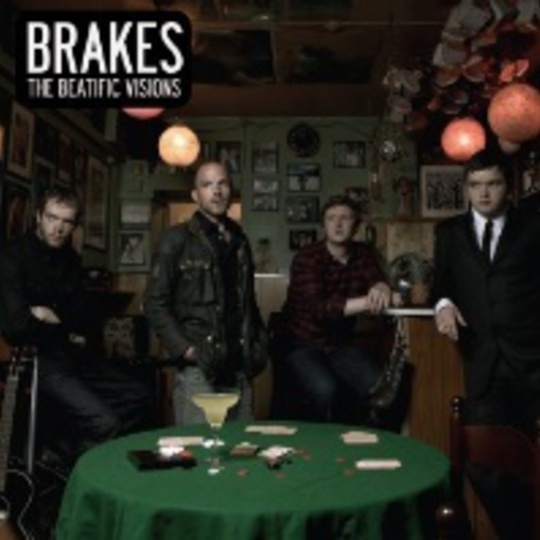 When then-British Sea Power member Eamon Hamilton and The Electric Soft Parade's White brothers announced they were contemplating a new project as a 'bit on the side', few would have expected it to last beyond the odd single and some haphazard festival appearances before imploding ungracefully, with the aforementioned trio retreating back to their day jobs.

Two years on, and two albums later, Brakes are not only still plodding on, but they've also unleashed one of 2006's most ambitious, eclectic and downright fructuous long players. And they've done so not against all the odds, but as total rank 5000-1 outsiders.

I suppose when this year's annals are laid to rest, it will be partly remembered as being the year of the hobby and spin-off, as The Raconteurs, Dirty Pretty Things and the Eagles Of Death Metal have all prospered to a certain degree, thanks in no small way to their members' merits in their past lives.

What makes Brakes unique compared to the aforementioned three is that none of the four individuals can claim to have set the world alight with their other employers. British Sea Power survived without Eamon Hamilton and will continue to do so long after his departure, thank you very much, while The Electric Soft Parade's star may have shone for a few (albeit too brief) months five years ago but little has been heard of them since. Meanwhile the fourth Brake, bassist Marc Beatty (and his band of indie under-achievers The Tenderfoot), has toddled along quite gracefully but has hardly raised many eyebrows over the years. No one would ever doubt the talent of the individuals here, but obviously the chemistry of the sum dwarfs the enterprise of the parts conclusively.

And that's what makes Brakes, and in particular, The Beatific Visions, such an enticing proposition.

Opening with the admittedly BSP-sounding (in places) 'Hold Me In The River', it soon becomes apparent that these guys all have a dream - the same dream - to be a part of some all-encompassing, genre-trespassing rock and roll quartet that sounds like a combination of all the best bits of the artists and songs they love without ever really mimicking anyone at all. So with that in mind, there are politics-addressing punk mash-ups ('Margherita'), countrified rock without any cheesy elements ('If I Should Die Tonight', 'On Your Side'), haunting ballads ('No Return', 'Isabel'), and even the conception of a new form of dance ('Spring Chicken')!

In fact, it would be easy to run through all eleven titles on this record as seperate reasons to justify why you should invest in The Beatific Visions. But I'll leave it at two, for now.

Both coming from opposite ends of the scale, both musically and lyrically. The title track itself, the mid-point of the record as it happens and easily the most radio-friendly single, shows a side to Brakes that few would have envisaged, in that their merging of instant killer hooks combined with Eels-like intelligent quirkiness ("She wants to know existence exists") would ride roughshod over any of the big-hitters you care to mention that have released records this year. And this is/was meant to be a side-project! As the embers of The Beatific Visions drift away, a frighteningly over-enthusiastic punk rant about the merits of who'd come out on top between porcupines or pineapples ('Porcupine Or Pineapple?') blows any cobwebs away. You feel you are listening to a different band entirely, rather than the next track on the record: it's loud, brutal, insane, and will probably lead to stampedes at Killers gigs around the country when the Brighton band play second-fiddle to the Las Vegas quartet.

When all's said and done, The Beatific Visions is one of the most enthralling, deceiving and delightful albums of recent times, and my message to its creators is simple. "Don't go back to the day jobs, lads!"