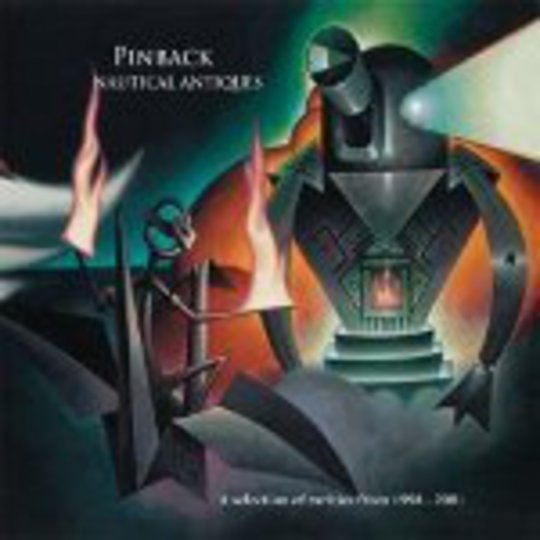 I dated this girl once. Yes, I actually did! It was crazy. We, like, held hands together and, you know, kissed an’ made sweet, sweet bacon on the beach! But then she screwed up. After a Pinback show she told a stranger at the bar she "didn’t like the show". It turned out to be a member of Pinback. FOUL!! It’s too bad – she deserved the very sky above, but my love for good ol’ P-back spans many, many moons. She had to go.

_ Nautical Antiques, on its own, definitely isn’t worth dumping someone over. However, to those whom Pinback are a regular treat, it serves its purpose well, compiling nearly a decade of 7”, compilation and yadda-yadda releases. As with most house-cleaning experiments, there’s bound to be a few dim corners that don’t get the once-over – put the _'Avignon' on that list... NOW! Once you hear the live version, the studio original included here sounds like a slow-motion Rob Crow unwrapping several cheese spheres/logs and placing them into his mouth. While singing. Send the demo version of 'Seville' to the slaughterhouse too, while you’re at it, stable boy. It sucked to begin with, and so did_ 'Concrete Seconds'_, a flappy, dingleberry of a song.

_ Whew, it’s good to clear out the clutter because there are several antiques left for the road show, starting with _'Clemenceau', a classic Pinback slow-burner that duck-walks guiltily over low-register coos from Crow and a signature Zach Smith bass rail. The catchiness of 'Byzantine' is criminal, evolving from more of the above into a surprisingly hip-hop-hook’d breakdown. 'Water Run' doesn’t amount to much after wetting its beak in another slo-mo bass riff, but 'Messenger', 'Versailles' and 'Anti-Hu' combine to form a warm one-two-three punch to start the album out. And don’t let anyone fool you: first impressions are everything. With melodies spread wide and catching air as the world drifts by, this triad of tracks offers a telling glimpse into a band that has mastered subtlety amid many instances of extreme aplomb; Smith’s once-in-a-lifetime bassery is amazing, but it also mucks up the odd track.

It doesn’t really matter though. By the time the busy bass, crude guitars and scrappy co-vox have time to sink in, you’ll let the drawbacks slide off the edge of your leather sofa. Pinback’s Summer in Abaddon _wasn’t quite up to snuff, but _Nautical Almanacs _reminds us why we fell in love with the San Diegans in the first place. But hey, I’m a fan. This collection holds _faaaar less for the casual consumer. Don’t buy this until after you’ve bought a bag, a clue and the first two Pinback albums.