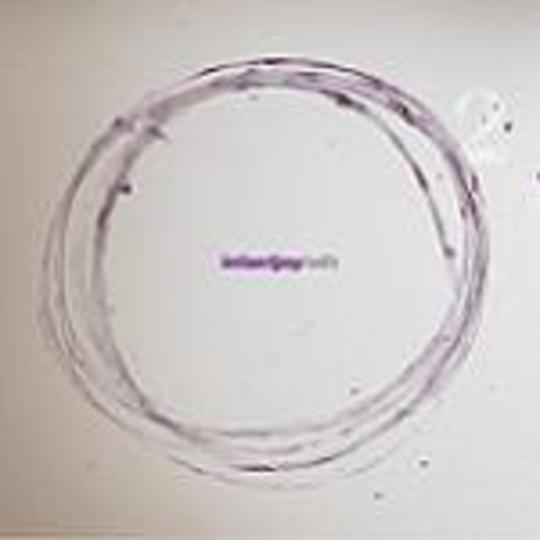 With, the second album from electro duo Infantjoy, seems on first impressions to lie firmly in the ‘ambient’ category. With gently pulsing beats, flickering bleeps and beeps, washes of subtly tuneful distortion, waves of electronic hiss and the odd surreal sample, it initially registers as soft, low-impact stuff.

However: first impressions here are, as so often, deceiving. Play it again, and again, and it slowly becomes apparent exactly how many disconcerting strangenesses lie under the surface. In fact, if close attention is paid, _With _actually becomes quite an unsettling listen, and also a strangely satisfying one – and the aspects of it which slowly reveal themselves and hook you in are exactly the ones that make it seem so flimsy on first listen.

Y’see, that low impact sound – those soft, lightweight waves of noise – make it quite hard to pin this down._ With_ doesn’t stick around in the mind; it won’t let you predict it; it doesn’t have hooks you can hum along to, and it’s quite hard to make it cohere in your thoughts. So: when you add notes that clink in a way that sounds like the beginning of the ice cracking, or samples in which anonymous people in an echoing room cry_ “Hear hear!”_ in response to motions which you just know bode ill for mankind; when soaring violins are counterpointed with alien vocal squelchings; when it just generally sounds like some darker, malignant world is knocking on the other side of the album and trying to get in… Well, it makes the whole thing take on a rather more threatening aspect, made all the more creepy for being attached to something so elusive and seemingly harmless.

That unnerving feeling is never made explicit, and it’s still possible to put this on with the intention of letting it wash around you. It’s just that when you do so, you need to be prepared to have one warily disconcerted corner of your mind constantly worrying and nagging at the sound as it whispers into your ears. If you’re inclined to put some effort into listening to music, and are interested in noise as art-concept as well as escapism, you might well get a lot out of being disconcerted by this.