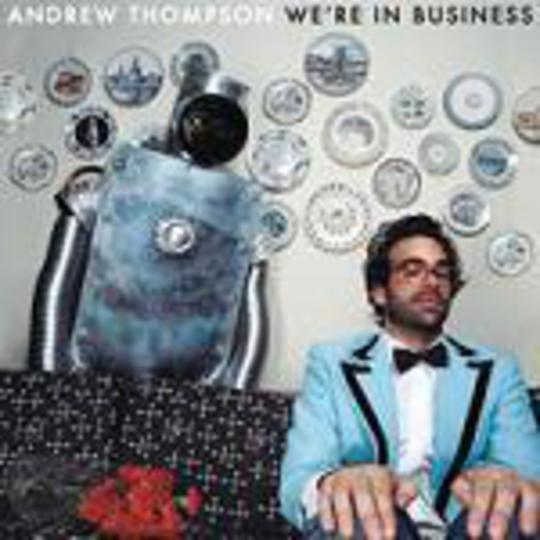 ‘We’re In Business’, the second single from Brooklyn soloist and self-proclaimed geek Andrew Thompson**, spends most of its length as a downbeat, minimal electro shuffle, interspersed with upbeat rapid-fire bursts of drum machine. And it does both these things well – the mixture of hypnotic electric melancholy and good-naturedly forceful drums is a pleasing one, and is put together well enough to stand up to repeated listening and catchy enough to’ve had me singing it on and off for the past several days.

This new-wave electro pop tune is, however, somewhat overshadowed by the guest appearance of a homicidal robot.

The creakily high-pitched voice of this frankly disturbing machine is first heard informing Mr Thompson that he loves him – right before hollering “I’m going to kill you”… Fair enough, then, that the rest of the song is an emphatic warning against the folly of trusting robots in pretty much any capacity, from child-minding to sitting in on a game of bridge. Basically, avoid the fuckers like the plague.

Not that this seems to’ve done Andrew Thompson much good: the cacophonous peels of disturbing mechanical laughter which spill from the speakers at the end of the song imply that his liaison with robots came to a gory end… Still, at least we have this amusing/tuneful/slightly creepy shot of electro pop to remember him by.

The Sun's Gone Dim And The Sky's Turned Black