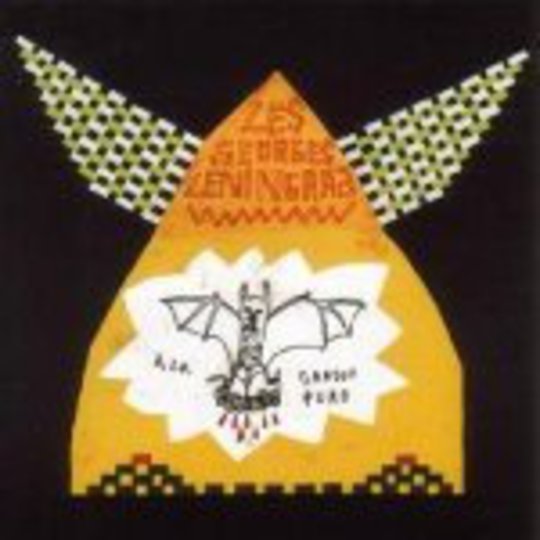 Having formed under less-than-ordinary circumstances, namely via an Ontario bar brawl, post-punkers* Les Georges Leningrad* have notched up a respectable list of supporters that include Erol Alkan, Sonic Youth, Le Tigre and Arcade Fire. Maybe it’s something in the Montreal water supply, but this former four piece (now a trio) have created their own certifiably crazy musical corner.

What it really sounds like is up to you, as it doesn’t easily conform to any particular notion of what popular music should be. And even the band’s self categorisation of ‘petro chemical rock’ doesn’t help much. Take the album opener ‘Sangue Puro’: it contains little ‘rock’, more Add N To (X)-style keyboard throttlings, layered with manically repetitive drum rolls, contrasted with an ‘all gone wrong’ ‘80s horror film-style lower range synth sound. Call that rock?

Well you know there’s meant to be a guitar - apparently Mingo L’Indien plays it - however it only seems to make a cameo on_ ‘Ennio Morricone’ and ‘Mange Avec Tes Doights’. He must be sticking to his ML-RCC synth, then, and concentrating on being ‘different’. But labelling this band ‘different’ is all too easy. In fact, Les Georges Leningrad do a good job of dodging even that label, seeing as ‘Mammal Beats’ and ‘Mange Avec Tes Doights’ turn in some palatable futureshock psychobilly-esque structured songs. But that’s just a passing phase in the mixed-up Leningrad world, because should you get too comfortable with one particular groove, then they only go and snatch some tribal culture with strange chanting on _‘Eli Eli Lamma Sabachtani’, then descend into special-needs chaos on_ ‘Lonely Lonely’. You’re thinking, _"Okay that’s fun, bet they’ve run out of ideas now".

Not quite: brace yourself for ‘Slick Answer’, the song that comes across all mutant rap like dishing out the lyrics "lick your toes" and "up your nose".

As this third album draws to a close so does the brain capacity of the band by the sounds of it. On final track ‘The Future For Less’, Les Georges have hit the big red meltdown button and are floating in soundscape space. And what a journey it’s been for the listener and the Leningrad crew. From below you can see the remnants of musical history from yesteryear; from up here you can hear Les Georges Leningrad smugly chuckling to themselves. They’ve run circles round everyone, ‘laid a bat’s egg’ of an album and left behind a cloud of confusion and innovation, just for fun.