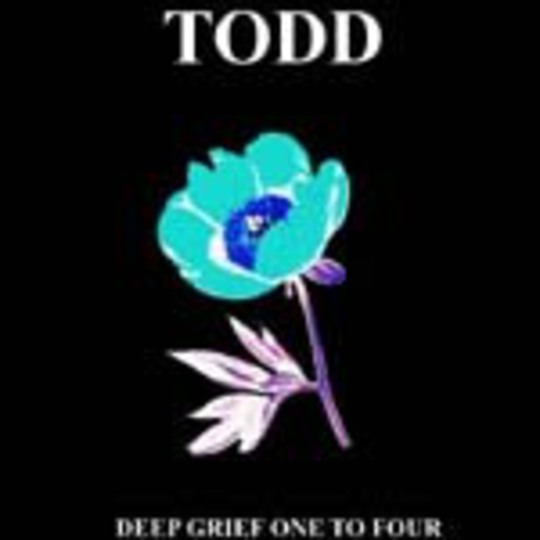 The man in the street, the man behind you in the post office queue updating his car tax, on your shoulder at a crowded bar waving a tenner as if it’s likely to attract the busy barmaid’s attention before your collected calmness: he doesn’t understand Todd. One train of thought rockets along on tracks that, using satellite photography, quite clearly spell ‘who can blame him?’; but one man’s poison, of course, is another’s passion, or some such bastardised adage twisted by time and human nature’s wont to paraphrase sayings Chinese-Whispers style.

‘Deep Grief One To Four’ read the five words adorning Todd’s side of this plays-at-33 seven-inch; no markings are really necessary, though, since the most so obviously speaks for itself. All right, ‘music’, Mr High Street Five Albums A Year Fifty Pounds A Visit Whatever Demographic Suits Your Sunday Paper. From a chasm full of molten white noise come disjointed vocals laced in agony; traditional instrumental output is fed into an abattoir and emerges in a wholly unnatural form. But then anyone who’s ever seen Todd knows what to expect: this is enough to have Wolf Eyes jamming with Trencher on top of an erupting volcano seem every bit as compositionally retarded as a boyband key change come the third chorus. You raise me up… before smashing me into flotsam.

Part Chimp are hardly shy when it comes to volume, either, but their contribution here is blessed relief following Todd’s utterly inhumane assault on the senses – all five of them. Their take on Hawkwind’s ‘The Watcher’ is, maybe, the most accessible song the muscular-of-sound four-piece have ever committed to a slab of wax (a particularly thick slab, in this case). The man who’s been served before you, smirking as he spins around, three fizzing glasses pinned in by flexed fingers and change of a twenty in his teeth (a tenner is rarely enough, after all): he’ll nod his head to this. Hopefully he’ll do so while making his way back to his table of Dressed By H&M sorts on their fourth drink in as many pubs this Friday evening, and lose balance roughly ten yards from home. Tumble and fall, Mr Adherence, Mr By-The-Book, Mr Unadventurous, Mr Virgin Express Shopper: there’s diddly-fucking-squat for you here, so get the fuck out of our neighbourhood.

Indiedom’s a ghetto for a reason: where there are no boundaries in the first place, the simple mind knows not where to wander, so wobbles its way to the well-known and television-advertised. This is how we keep you from us; this is why no lines need be drawn in the sand. Now wipe yourself off and order another vodka Red Bull or whatever’s got a double-page promotional ‘feature’ in FHM this month.

Nothing's Going To Change Your Mind