We Came To Take Your Jobs Away 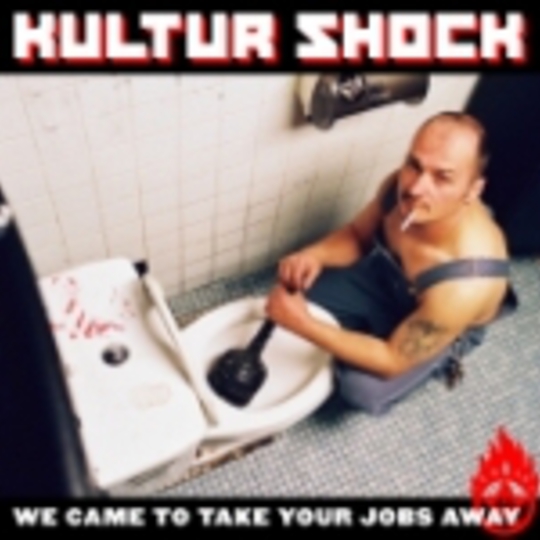 Okay, first things first: if it wasn’t for the shock success of Gogol Bordello on these shores it’s unlikely that Kultur Shock would be anywhere close to the radar - the fact that they have played six European tours in the past four years to apathy attests to this. However, that shouldn’t put you off, because here another off-kilter gem that brings the traditional songwriting structures of old and fuses it with the energy of punk-rock unearthed.

Here though, instead of the gypsy-folk that Gogol Bordello proudly smatter their albums and t-shirt slogans with, a much wider circle of influences can be found; that’s perhaps inevitable, given the members’ homelands of Bosnia, Bulgaria, Japan and the US. Still, it is a true British punk-rock spirit that holds We Came To Take Your Jobs Away together.

The album opens with ’God Is Busy’, from which the album title comes from. Pounding drums and stabbing guitars are the order of the day, while Eastern-accented vocals jump into every open space. The tempo is fast and the spirit is affirmative despite the confrontational vocals of lead vocalist Gino Yevdjevich, and on the whole the track is somewhat vaguely reminiscent of Larakkin Love’s more experimental moments.

It’s when this happy spirit is lost, though, that Kultur Shock truly hit the mark. ’Zumbul’ effortlessly bridges the gap between the scorching riffs of Tool and the expansive orchestration of A Silver Mt Zion, creating a work that looks over both, with Arabic wails pining from a pillar of sand and exotic instrumentation weaving through foreign worlds.

Sometimes their abstract mix of elements is a little hard to swallow, and occasionally the bursts of energy do hide a lack of real substance, but for those with an interest, for whatever reason, in delving into the strange world of folk-punk then We Came To Take Your Jobs Away is as good a start as any.