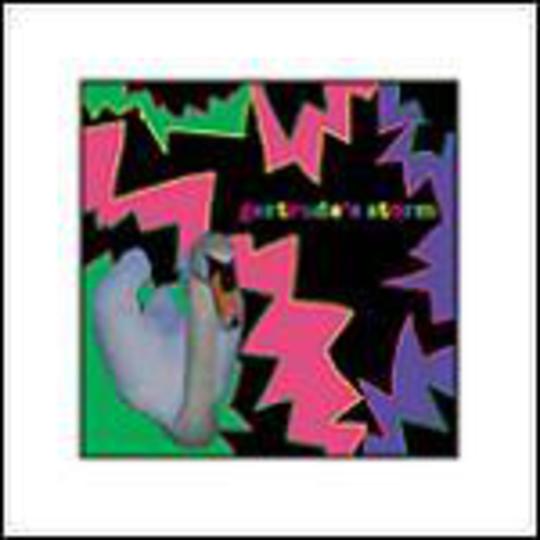 London sextet Gertrude’s Storm are one of those frustrating acts who have a load of great elements to them but don’t quite manage to fuse them together into a fantastic whole.

For example, first track 'Drinking My Brain' (cool song titles are a flawless strength) has deep, grooving bass, laser synths and stuttering drums, sometimes sounding like The Bee Gees gone electroclash, and generally feels worth dancing to. But then the vocal line squanders all this dark, pulsing sexual threat by being a chant-along Woo-hoo! pump-yer-fists-in-the-air-a-thon. Which isn’t what we want, really.

Then there’s 'Recycling Old Crap', which starts with distorted intent before turning into fairly bog-standard break-up pain fest. And it could’ve been ace, if they’d maintained the threatening darkness; but instead it’s the same as a thousand and one other expressions of relationship hurt, except with synths. ‘Jesus! Horses!’ (see what I mean about the song titles?) is a slightly different beast, more experimental than pop. Starting by building up sexually charged layers of vocal, drum, and instrument, it then introduces a vocal wanting to know exactly what’s so weird about not wanting to fuck someone, and expressing the opinion that a complacent assumption that one’s going to get laid no matter what might actually be rather more abnormal. Which is fantastic! Only then it loses focus, and drifts off into remix territory – it does reclaim the focus later, but it’s still annoying that it doesn’t cling to brilliance all the way through.

However: these frustrating vacillations between brilliance and mark-missing have at least roused the hope in me that one day I might be blown away by this lot. Which is a hell of a lot more than most more-coherent artists manage…

Nature of the Experiment

The Idiots are Winning