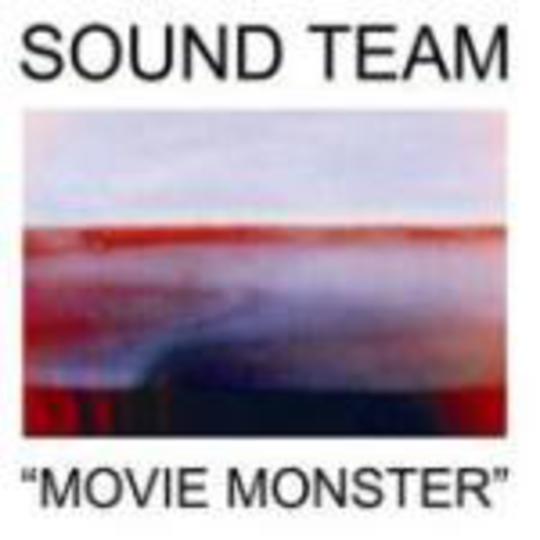 I’m a sucker for punctuation. Done well, commas and exclamation marks in titles are as pleasing as that feeling on the last few hours of the working week, but your/you’re and its/it’s confusions send me flying into a rage. But some titles even I can’t get my head around, like why exactly does the title of Sound Team’s debut album carry those quotation marks?

More importantly, who cares? For all its title’s unanswered questions, “Movie Monster” itself is far easier to understand. The Texan sextet have arrived at a sound with the chorused vocals and electronic feel of TV On The Radio and added a delivery laced, occasionally, with gritty angst; some hidden extras are to be discovered en route, too. You could split Sound Team’s debut into two halves: those songs which follow a more traditional live band sound and those which wander off on their own paths, either quiet electronic soundscapes or more withdrawn numbers.

Both sides suffer the occasional casualty – the repetitive six-minute disco-lite loop of ‘TV Torso’ could be a nonchalant soundcheck from The Rapture, whilst vocalist Matt Oliver strains so hard throughout ‘Afterglow Years’ that it sounds as if it was written either for or by Bono – but importantly there’s enough variety in the album’s sound to keep it from going stale. Not every song has its own individual sound, but there seems to be something different to be found below the surface at critical moments.

Compare ‘No More Birthdays’ and ‘Back In Town’ as an example. Both bounce along with the same rhythm, but the more pronounced groove of the latter sets it apart from the more predictable formula of the former. With a vocal pattern not always matching the rhythm of the keyboard-punctuated backline and an obvious American twang to the pronunciation, there’s even a hint of Why?-style indie-hop about ‘Back In Town’, rendering it easily the most interesting track present.

With ...And You Will Know Us By The Trail of Dead producer Michael McCarthy taking the helm as the album’s co-pilot, the similarity between the layering on songs like preceding single ‘Born To Please’ and ...Trail of Dead’s output – particularly songs like ‘Intelligence’ from their The Secret of Elena’s Tomb EP – is no coincidence, even if Sound Team don’t share in their normally-heavy sound. With McCarthy’s guidance, “Movie Monster” is stretched at the edges, filling every frequency for a more widescreen sound.

The result is a confident debut album which, alongside the one obvious peak of toe-tapping excellence, is consistently good and varied enough throughout to win hearts, and one which many new bands this year will struggle to better.