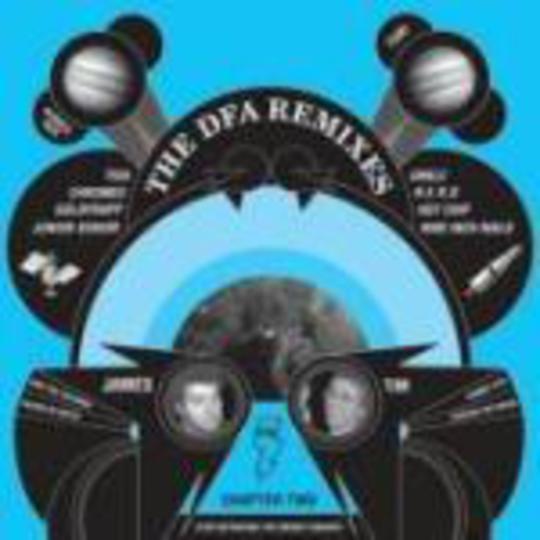 The possibility of remixes garnering an official release seems to be marginalising. Unless on vinyl for those select few ardent DJs among us, a perusal of international blogs will find most remixed MP3s lingering in the il/legal abyss that a CD will only collect and release months later. Take _The DFA Remixes: Chapter Two_ for instance, where, oh, seven from the eight tracks can be located online and sucked through cables, and the format seems more than a little redundant.

**DFA** don’t do themselves any favours either by remaining the butter of remixers. It’s good and efficient and a plus at certain consumption levels; but it won’t find anyone proclaiming their absolute love for it any time soon. Regulars on many an indie-funkster’s b-side, their taking of a song and subsequent addition of an awful amount of bounce exposes itself to be enjoyable and mind-numbingly dull in equal parts, sometimes simultaneously.

But Tim Goldsworthy and James Murphy are not so interested in simply altering a song - they strip it entirely and dress it in their own fabulously sleek attire. The original lyrics and various remnants of melody are all that’s to be found under the layers of elongated distortion on **Hot Chip**’s _‘Colours’_, and while the military bass intro of **N*E*R*D**’s _‘She Wants To Move’_ is one of the highpoints of the remixes, turning The Neptunes’ production pinnacle into the bastard child of The Human League and Soft Cell is uncalled for.

Ultimately, the flaw that is threaded through the album’s entirety is length. Seventy minutes for only eight tracks is excessive, be they remixes or not, and each track is suffocated and diluted until it proves to be just some noise, somewhere. The expansion of **Goldfrapp**’s _‘Slide In’_ to thirteen minutes truly beggars belief.

The possibility of remixes garnering an official release _does_ seem to be marginalising. With this release, I can see why.

The Best Of, Sepultura