So This Is Great Britain? 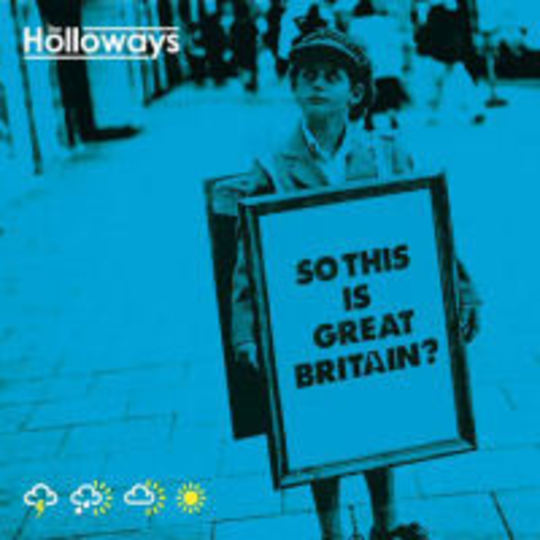 So this is Great Britain, is it? ASBOs, Burberry headgear, empty wallets, cheesy chat-up lines in crappy night clubs, smack-addled prostitutes in Kings Cross station and drunken middle-aged men on park benches. According to The Holloways it is, and while they may not be far from the truth in some respects, GB's hardly twinned with Hades either.

Don't get me wrong, everyone from The Clash to the Manic Street Preachers - and even the current emo facade of hating one's self and wishing death in the process - has made complaining sound viable, credible, interesting, exciting. Unsurprisingly, The Holloways borrow a lot of their musical allegiances from the former, although in a purely second-handed manner as they are quite clearly a bi-product of The Libertines. What makes them slightly more distinctive is the vocal harmonising between Alfie Jackson and Rob Skipper, which depending on which part of the fence you sit could either bring back visions of late 70s terrace hoolifans or the stilton-tinged cock-er-nee knees-ups of Chas And Dave.

Having been prominent on the London live scene for a while now and instrumental in the development of the Frog club night, it was inevitable that The Holloways would end up with a half-decent record label sooner or later, before the whole post-Libs scene died a death along with at least one of its founder members.

What's surprising, though, is that a good half of So This Is Great Britain? is actually quite pleasant, in a jaunty, getting-ready-for-a-big-night-out sort of way. 'Two Left Feet' and 'Generator' are without doubt two of the most exciting singles that 2006 has bestowed upon us - it's no surprise that these two songs stand head and shoulders above the rest of the record. Closing track 'Fuck Ups', with its story about a 40-something who lost it all and ended up a wino, actually has one or two lyrical couplets that would even the most sour-faced and fun-hating miserablist would struggle not to raise a chuckle at, while 'Happiness And Penniless' and 'Most Lonely Face' also exhibit the band's competence at completely different ends of the musical spectrum, from two-minute power pop to five-minute ballads.

Elsewhere, though, there's a certain clumsiness in a lot of the wordplay and rather too much filler. Anyone waiting for (or should that be wanting?) a second album of quality material from this lot isn't advised to hold their breath for too long.

Future Of The Left at Buffalo Bar, Islington, Sat 14 Oct