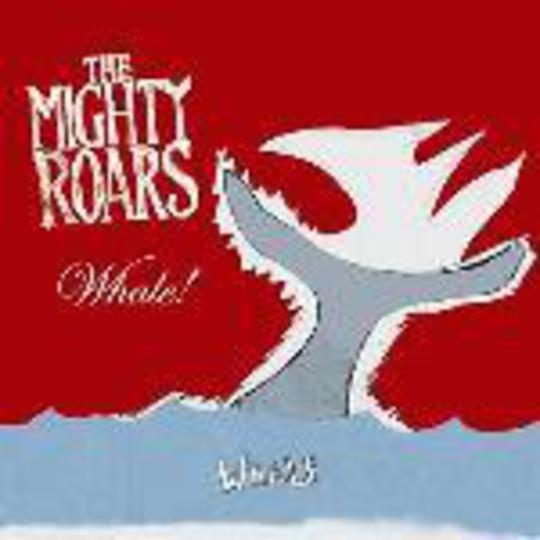 Trashed out, junk rock tracks can be written about anything. When the attraction of singing about girls and booze and drugs and knives finally wears thin, it's time to hunt elsewhere for inspiration. So, when the bass sets out like it's surfing sockless on a bloodied board-edge and the intonation in the spoken-word intro shifts, you begin to think that the band might actually mean business this time; instead of just fading out into reverb and rehash. But by the first verse, it's clear that The Mighty Roars have ventured into unchartered waters to hunt the elusive whale only to pussy out when they close in with the ready harpoon.

Isn't it time someone updated this template? Instead of sucking the eyes out of your sockets, 'Whale' crosses the 'rawk' with cartoon Scandi' cutesy-cute and the whole thing just sort of skirts along the perimeter between mediocrity and a lasting impression. I can see why I'm supposed to like this - it's fast, loud and goonish - but when Lara Granqvist sings "I've got a heart that's as big as the ocean, I've got a heart that's as fat as a whale", I just can't believe her. Try as she might her voice just can't penetrate through a chorus with three guitar chords that all sound scared and sick and ashamed of themselves. Maybe if this track had some personality, or depth, or just the faintest outline to hint at character, then I'd be able to concentrate all the way through its three-minutes-ten.

But I can't because this is all just surface noise. I'm sure there are people that will defend this, but just because your friend can shout louder than everyone else doesn't make her any more interesting. Especially when she's chatting blank gibberish. So maybe the whale idea should just be discarded with the rest of the hangover and they can crawl back to the comfort and garage-rock security of a b-side called 'Whipped Ma Bitch'. Please, someone re-invent what it means to be 'pop' and 'fun' and 'single' so that I can stop feeling guilty for trashing on something that only ever sought to entertain me for a few minutes.

Some Thing Came Up