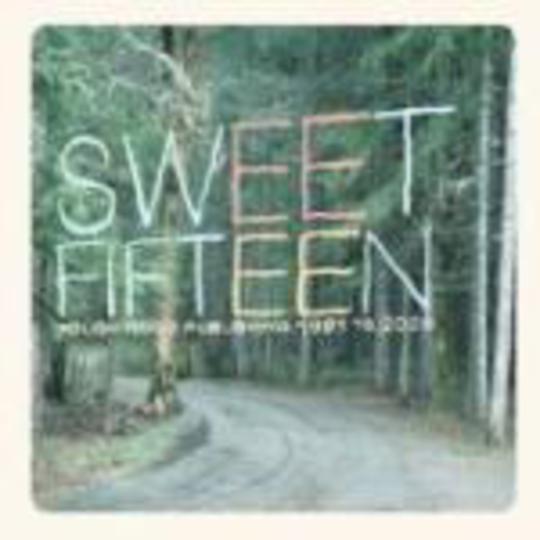 I am twenty years old. In the grand scheme of things, I have taken only tentative steps into my lifetime of musical appreciation. I am wet-faced, rosy cheeked and not yet jaded (mostly). But despite my relative naïveté I can tell you this quite confidently: I cannot picture in my future a day when I'll look back hazily and reminisce on the music publishers of my formative years, and I can't be alone. I'm sure conversations will touch on the artists that stayed with us, or the labels that released albums that did something vast and intangible, but mistily recalling groups of diligent but nameless men and women administering copyrights and securing licenses just won't figure in this nostalgic equation. Where do they figure in the process of our consumption of music? Sweet Fifteen is something of an attempt to draw attention to and celebrate these faces in the small print, but despite the sum of its parts, it's often an unfocused and somewhat self-indulgent listen.

Charting fifteen years of Rough Trade Publishing, an offshoot from the collapse of the original Rough Trade group in 1991, these two discs chart signees in rough chronological order, from the very early (The Violent Femmes, Tindersticks) to the very recent (The Futureheads, The Wrens) and all that came in between. It's quite the journey: from anxious, ethereal electro-pop, dream-fuelled noise and laddish punk through new-wave, off-pop and all manner of instrumental experimenters, with the odd uncatergorisable gem here and there. But the diversity is often more oppressive than impressive, particularly on the first disc. Following Tindersticks' bleak 'Tiny Tears' with Dubstar's 'Not So Manic Now', Rocket From The Crypt, and Mule's hilariously awful country growl 'Mississippi Breaks' may have been intentionally divisive, but it just feels awkward and marginally self-congratulatory. This sequence is the first suggestion that there's nothing particularly unifying about Sweet Fifteen as a collection of songs, besides the fact that, somewhere in a room, there are a group of people you don't know who are awfully proud to have been involved with them, and want to tell you about it.

This feeling of indulgent back-slapping rears up in a few select moments over the remainder of the compilation but soon reaches a bearable level thanks to several wise additions, such as The Sea and Cake's Sam Prekop's dry and dreamy piano-led 'A Cloud To The Back' and fellow Chicago native David Grubbs's barrelling guitar pop of 'Knight Errant'. The latter stages of Sweet Fifteen feature Animal Collective's elasticated cosmic folk jam 'The Purple Bottle', the ornately orchestrated melodrama of Clogs' 'Thom's Night Out' and a taster of The Wrens' stellar The Meadowlands LP, 'She Sends Kisses'. The post-rock and pure instrumental presence also grows as the compilation progresses, from Tortoise and GY!BE to The Rock of Travolta and Pelican. But where the tracklist attempts to confound and impress, the effect is merely that of thirty-two voices shouting each other down. Nothing has sufficient air to stand up and breathe for itself.

The main question that this compilation conjures up is what kind of listener will honestly be able to sit through two discs and fifteen years of artists connected by such a vague link? Even as a chronological artifact it's almost too intentionally disparate to show any sort of gradual ascent from 1991 to today. The people behind Rough Trade Publishing obviously have every right to champion themselves and, yes, the spectrum of acts is very impressive, but_ Sweet Fifteen _feels eerily akin to one of those endlessly sycophantic talking heads TV shows where arbitrary pseudo-celebrities revel in their own nostalgia - no doubt extremely enjoyable for them, but a markedly one-way experience for the rest of us.