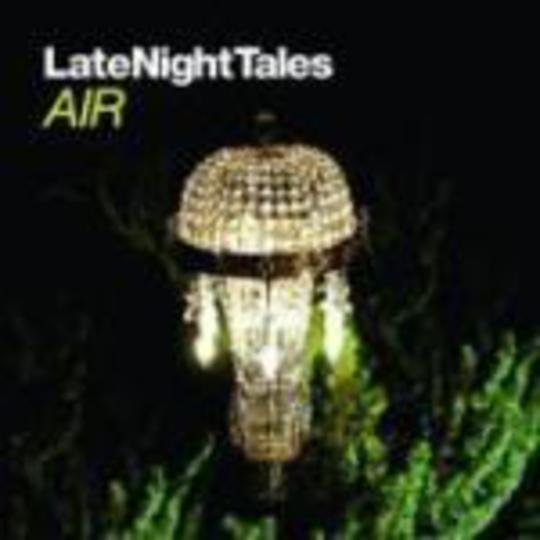 Two weeks ago, I imagined one didn’t buy compilations for anything more than an affordable introduction to a few bands in one nifty CD. I couldn’t see records made by ‘Various Artists’ appearing in ‘Top 10 of the Year’ lists, because no one makes time for a compilation – no one cancels prior engagements to spend time with one, loving it to its very core before leading it by the hand to an inevitable death. Two weeks ago, before I had received **Air**’s _LateNightTales_, compilations to me were for purchasing, skimming and burying in a pile of plastic…

When I did receive _LateNightTales_, one week and six days ago, and the über-ambience of _‘All Cats Are Grey’_ by **The Cure** morphed into the psychedelic warble of **Black Sabbath**’s _‘Planet Caravan’_, I had to have a double take: is this really a compilation? It’s too dense, too _formed_. There are double-albums, four-track tour-only EPs and classic reissues that have less ambition and graceful unity than this. When the instrumental interlude from **Nino Rota**, from the film _Il Casanova Di Fellini_, finishes and the brain settles from the abrupt swerve to _‘I Shall Be Released’_ by **The Band**, it’s clear Air have orchestrated something unabashedly, unequivocally and undeniably unique.

_‘The Old Man’s Back Again’_ is, however much it's surrounded by gold, the peak of the collection. Recorded when **Scott Walker** conveyed anguish in a conventional three-minute alt-country manner, there are still repressed flashes of Walker’s recent avant-garde releases: the ghostly backing vocals, the manipulative incidental sounds, and his wonderfully sinister baritone vocals. From there, there’s the orchestral wonder of **Tan Dum** and the purveyor of all the things classical _and_ electronic, **Sébastien Tellier**, the closest the tale gets to an ‘Air’, as such.

The problem – and it is likely there always is one when I’m reviewing – is how do you evaluate what is essentially a mixtape of one band’s influences and affections? Do you award an eight or nine out of ten for being inspired by The Cure? How about **Minnie Riperton**? Four or seven for liking the high-F notes of _‘Lovin’ You’_? One doesn’t return homemade mixtapes with Post-it notes, constructive criticism scribbled across it, so as a collection of songs it’s perfect. A perfect rating, however, it does not merit, perhaps because it just may be too easy to group great songs together.

Regardless, Air _have_ arranged something I thought impossible – a compilation with longevity, mood and sonic exclusivity. This is like the ambassador throwing away his sodding chocolates and giving his guests a yacht and three free slaps of his permatanned face - a gem in the most generous way imaginable.