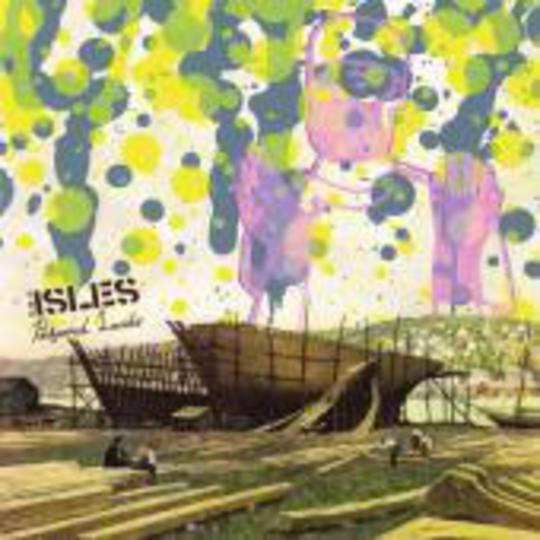 Talk about making life difficult for yourself: The Isles, New Yorkers young of face but mature of song, play up (albeit probably unintentionally) to their comparisons to The Smiths by placing the most blatant rip-off of the Morrissey-fronted act’s material since, well, ever, right up front. ‘Major Arcana’ opens proceedings on the four-piece’s debut long-player with so much more than a nod and wink to the flower-waving deity of all dour-faced indie kids: it’s a ridiculous pastiche piece that will trip many a first-time listener forward and onto the eject button.

Those overcoming this hurdle, though, will be well rewarded. Is this the right time to mention that Mozza himself was an athletic fellow in his youth, so even the most hardened of his fans should attempt to get over this curtain-up stumbling block? No? Too tenuous an argument? Okay.

The far-jauntier ‘Our Kitchen Test’ does retain a semblance of Smiths-like sound, but the ‘blame’, if you will, for said similarity lies primarily at the feet – or in the throat – of Andrew Geller. Presumably it’s simple chance, fate even, that The Isles’ singer sounds so very much like the Stretford-spawned quiff-topped sort already repeatedly referenced. It shouldn’t be held against him in a negative sense, as elsewhere his vocal contributions are sweetly affecting.

Case in point: the pretty three-and-something minutes of ‘Summer Loans’, which packs a bouncing bass-line and an ever-so-slightly askew whistle into an already bulging sack of summery pop hooks, ripe for slinging over a shoulder and carrying off to some wonderful Famous Five-style adventure. Although they largely rely on acoustic guitars to convey their sometimes sumptuous, always satisfying, melodies from concept to shiny compact disc, The Isles aren’t lacking volume-wise. ‘We Give A Receipt, We Take A Receipt’ is a rollicking racket of frantic strumming and rapid drum beats, a fizzing-whizzing-banging number informed primarily by Sixties pop’n’roll, smiley-happy handclaps and all.

By ‘Tropical Lamby’, track seven of ten, all but slight thoughts of that ‘S’ band have receded: the only link between the song and that band is a lyrical one, as Geller sings something about tulips being someone’s favourite flower. What? Morrissey was keen on gladioli? Again, I’m clutching at straws, or stems, that aren’t there? Perhaps you have a point.

The point being, if the above failed to say as much, that The Isles are a lot more than the overly-Anglicised, particular-act-aping outfit certain reviews have painted them as – at times they draw more of a parallel with Interpol than anyone else. They’re a great indie-pop band, basically, and one that’s delivered a decent debut that deserves recognition for its one foot in the present as much as it does respect for its excellent amplifying of echoes past. There are ghosts in this machine, for sure, but the oil’s fresh and the cogs spin perfectly, irritating archaism a gremlin absent from the works.

Play For Your Life