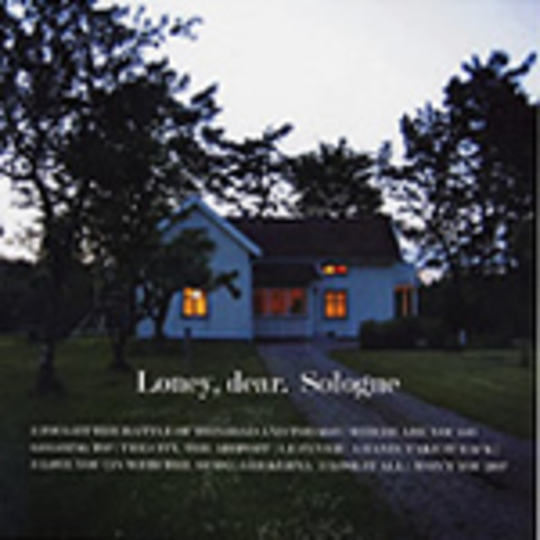 I'm onto you, Sweden. Quietly dispatching all these earnest indie ambassadors across the globe - Jens Lekman, Agent Simple, Envelopes - each one edging you ever closer to some worldwide stranglehold. Your newest footsoldier though, isn't quite going to make the advances you're hoping for.

Loney, dear are somewhere between a DIY indie folk outfit and a mathematical anomaly: a one-man band with eight members. Emil Svanängen balances mics on bookshelves, moves armchairs into spare rooms to accommodate drums and crafts these miniature homemade compositions. His already expansive catalogue suggests he's had enough practise and the subtle polish on Sologne confirms it - these are lovingly crafted songs, even if they don't all make the sizable impression they dearly want to, drifting listlessly through familiar acoustic landscapes, never settling, never setting themselves apart from the other thousands of sincere folk nobodies.

But when Svanängen and friends hit their stride, it's something both intimate and welcoming. You're in the house, probably ushered in and handed a drink and a microphone. Lead single 'The City, The Airport' is three minutes of bubbling horns, drum machines and joyous gang chants that wouldn't sound out of place on Architecture in Helsinki's latest album (Emil's vocals, coincidentally, come on like a softer Cameron Bird). 'Le Fever' builds an insistent groove out of xylophones and strings, breaks it and then escalates into a shuffling, screaming end. 'I Fought The Battle of Trinidad & Tobago' and 'Where Are You GoGoGoing To?' may be more of a limp-wristed nudge than an immediately attention grabbing one-two of an opening statement, but they succeed where 'Sologne' later fails: they go somewhere. The former has these syrupy harmonies backed by little more than a plaintive whistle, the latter a solemn bounce punctuated with miniature marching snares. They are exercises in restraint and delicacy.

When Loney, dear lose steam, though, we're left with non-sequiturs like the listless organ instrumental 'Grekerna' or rather cloying cuts such as 'I Love You (In With The Arms)'. While barricading himself in apartments and basements has given Svanängen's songs a sense of meticulous craft, they also sound, often to their detriment, like the work of someone shut away in a world entirely their own. There's great potential here - comparisons to Seven Swans-era Sufjan and the sparer moments of Death Cab For Cutie's Transatlanticism are not entirely unfounded. Perhaps with a few daytrips, a few weekends away, Loney, dear could harness bedroom pop that fixes its gaze more on the view outside the window instead of the furniture within.

As Cruel As Schoolchildren