The Body The Blood The Machine 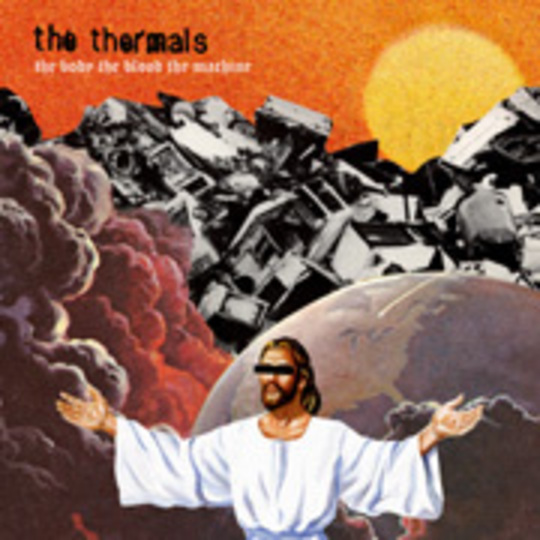 The Thermals aren’t boffin sorts: you don’t need a degree in astrophysics to get a firm grasp on their straightforward riffin’ and Sixties pop melodies, and nor do they make any bones about the situation. This is rock-it science, not rocket science, and The Body The Blood The Machine is but lesson three of this core curriculum course.

The follow-up to 2004’s much-acclaimed Fuckin’ A long-player, the band's second such release, this ten-tracker makes up for a lack of variety with a series of immediate songs that bore their way effortlessly into the listener’s skull; once in there, the messages hollered by singer-cum-guitarist Hutch Harris sink in slow, as if being consumed by the thickest quicksand. Musings on God and wider-reaching religion-orientated concerns, comments on global political matters and governmental actions’ effects on the layperson, and general doomsday grumblings comprise the album’s central themes. He repeats “The world is over”_ on closer ‘I Hold The Sound’, and suggests that, should the Earth not meet its end anytime soon, he’s had all he can take regardless on ‘Back To The Sea’: “I’m gonna crawl back to the sea”.

The usual comparisons still stick – the pop-inflected punk of Guided By Voices, Pixies, any high-tempo rock act popular with indie kids proper – but there’s something about The Thermals that doesn’t warrant absolute acclaim. On a personal note, I never wholly understood the cascade of commendations that followed the release of Fuckin’ A, and again the Portland trio leave me split with The Body…. Yes, it’s a well-realised punk record – scratchy yet punchily produced, gritty lyrically yet compositionally syrupy – but a distinct reluctance to step out of their well-worn mould ensures that The Thermals are unlikely to witness any audience growth in this record's wake. Only ‘A Pillar Of Salt’ truly shines here, its buzzing Mates Of State-like urgency a certainty to set fire to dancefloors worldwide, given the chance. The rest is a little too homogenous to warrant many a repeat listen.

You’d call The Body… a disappointment, but what, stylistically, were you expecting? Explosions In The Sky? Tortoise? The Thermals do what they do and do it well, but it’s 2006, not 1966 – compared to many a contemporary punk outfit, The Thermals sound positively stone age.

Still, history's not the toughest class to pass: a couple of listens' revision and you'll have learned everything there is to know about this particular punk-rock subject.

Sean / When Your Heart Spills (split)