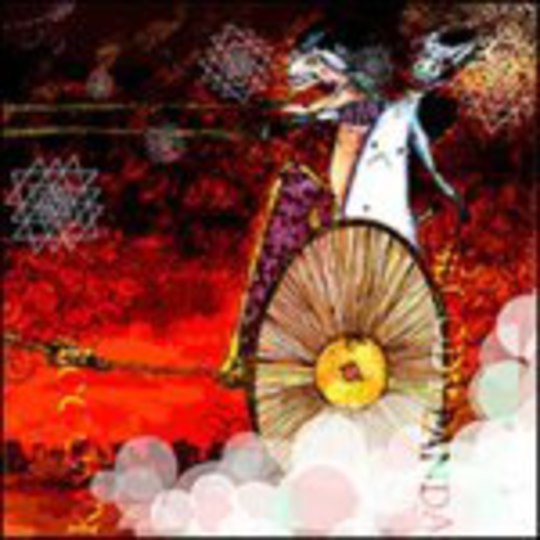 There is a scientific theory called the M-Theory, which argues against the accepted belief of our universe existing in four dimensions and taking the form of particles, instead putting across the idea that there are, in fact, eleven dimensions composed only of 'strings', which are either closed or open. Unlike the particles that form the basis of the widely-taught, traditional Quantum Field Theory, these strings can also stretch - from thousandths of a millimeter to hundreds of kilometers. In the accepted three-dimensional QFT model, the three tracks contained on this 12-inch split seem perplexing, but under the M-Theory the music of Kayo Dot and Bloody Panda makes perfect sense.

'Don't Touch Dead Animals' is Kayo Dot's contribution; a haunting, two-part mammoth as ethereal as it is enigmatic. Draw the curtains and dim the lights and it's probable that many hairs will be standing on the back of your neck as a sweetly spoken introduction passes through willowing trumpets and gasping shrieks to a wall a female war cry, struggling to penetrate innumerous layers of menacing distortion and plunging drums.

By now any amount of time could have passed, and there is no sign of light at the end of any tunnel with Bloody Panda's two contributions coming into focus. Imagine being kidnapped outside an Aztec temple and waking up in a tomb filled with snakes, the chants of sacrificial rituals barely audible above the slithering. The pounding riff is the sound of your heart valiantly trying to escape your ribcage as the tribal percussion becomes louder and louder, faster and faster, threatening to take you to the altar to meet your fate.

There is so much here, hiding in the shadows, that it will take dozens of plays for the needle to uncover every element held in these three tracks. In the end there is no explanation needed: no matter how long it takes, or how many dimensions are stretched, passed through or destroyed, it's only the journey that matters, and although here it's a frightening one, littered with dead ends and periods of jet-black darkness, it's a journey you will want to take again and again.