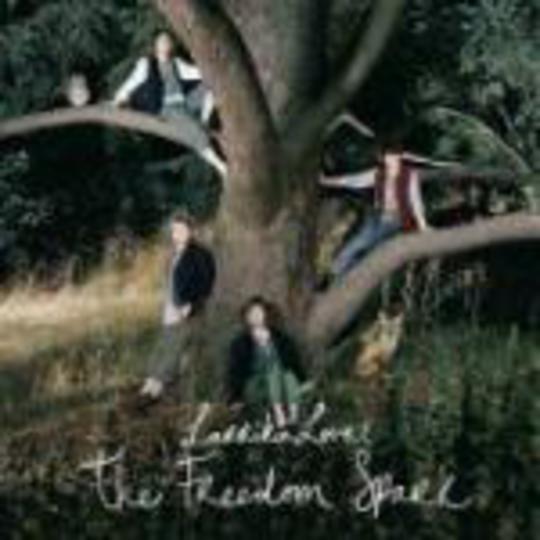 "The Freedom Spark is a record consisting of three parts... It is an exploration of innocence, of childhood, of human nature, and, ultimately, the yearning to have a real sense of freedom... [the album] is the first installment of an ongoing exploration. It reaches its own conclusion as a first segment, but in no way is it the finale." - Edward Larrikin.

You don't have to be the finished article to leave an impression. In the same way, you can be influenced by something without claiming to be a match for its beamish glory or to understand and absorb it completely. Though we're not keeping score, it's ridiculous to imagine that Larrikin Love will ever touch the literature of William Blake, and they remain a galaxy or three away yet from the dizzy stars charted by sonic forebears The Libertines or The Clash. That much parody would be suicidal, and in grasping this the West Londoners add to the handful of reasons why they matter more than other bands around them; bands that allegedly exist at a same low level of imitation. I know from experience that I don't bear fakes or imposters after twenty or so listens.

That sliced-up quote from Edward Larrikin's preface to his band's debut album is going to be the reddest rag to many, and I admit that I can see why. 'Pompous', 'contrived' and 'pretentious' are all adjectives I can see being lobbed towards his laying bare of the record's romantic disposition and intent. But whether it's naïvety or bravery, to me it appeals and feels the polar opposite to the stuffy poutings of some misguided prog-rock fool. To me it's an enthusiasm and conviction that's as refreshing as fallow fields and fresh air after the artifice of London (and vice versa). Of course, it helps a great deal that the frontman comes over so endearing; but it is a testament to his troupe's personality and character that he manages to come over at all.

After the chords that come crashing through the haunted, fedback intro into the glare of 'Six Queens' snake and subside, the jaunt begins. Despite the kinship with urch-punk, it'd be a joke to say that style takes substance here - the music shines where it has to, player rhythms liberated by the gleam of Micko Larkin's chiming guitar. When instruments simmer down, platforms are built from chords that talk tall and tough enough to let Ed reveal the "mascara running through my bloodstream". Not common chat, by any means, and when he does talk in unavoidably stolen tongues - "I've got a broken heart" - it is immediately teased with the retort: "I want to be a cherry-lipped little cheap tart." Despite these lofty ambitions, there isn't a trace of over-indulgence on the entire album; the band is tight and mean with their notes, but dig out enough depth to give legs to the musical mongrel born from insinuations of things like gypsy-folk and calypso.

I think a lot of people forget how young Larrikin Love are as a collective, (which must be an acheivement in itself given the cut of Eddie's jib; with his babyface and semi-shaven bonce, he looks ten fingers the newly feral lamb). Debut single 'Six Queens'/'Little Boy Lost' was only released as a double-A this time last year, for god's sake. In that time, the progression from early web demos to final album mix is well evident; a re-worked and re-released version of 'Happy as Annie' being a case in point (although it does still remind me of a chicken playing a banjo, possibly the result of one sore night's dreaming). The main thing, though, is that a band with such a strong idea of what they want to do is rarely able to realise that vision with their very first explorations and forays into it. As a collection of songs, The Freedom Spark is admirably coherent and unusually focused, but it is still very much a collection of songs; the majority of its first 'section' - "Part One: Hate" - shaped by former singles.

For my money (approx. -£1,100 at time of writing) the best of these arrives with the third track. 'Edwould', released earlier this year, races and rattles something sublime and is perhaps the record's most articulate and complete manifestation of the 'Hate' theme that claims it. "Intrinsic, claustrophobic tales of self-doubt, constraint, hormones and at its darkest, rape and murder." Well, 'Edwould' leaves the raping and murdering to '...Annie' but clatters along with enough pace and Freudian headjunk to send the most anxious claustrophobe running back to the past in the closet. A proper bedroom anthem, then.

The album uses the singles early on in order to gather momentum and trust, bringing the listener round to Larrikin's way of thinking. By the time Jamie T - one of many special guests - slurs his way into earshot talking of "Young Dear Lovers" (as is his wont), the middle section has already been and gone. "Part Two: Fairytale" is a single song - the bottom of the garden, dewy-eyed slice of carefree sentimentality that is 'Fell At The Feet Of Rae'. Things could take a turn for the worse here. There's a piper. It's almost too soppy, but then you put yourself into it and with the right lighting its headless reverie is fine, and works especially well as the medium between two mayhems. This is Ed's albion anyway, so he can do what he likes, and the cynic is reborn presently; lurking as shadily as Cocker as he leaves us 'On A Burning Coast'.

As the album races towards this departure, the quality persists. 'On Sussex Downs' loses nothing that made it a long-time live favourite, while 'Forever Untitled' is a labrador of a tune and perhaps the most stupidly uplifting song I've heard all year.

I went to the country this weekend and took this record with me. I can't lie and say I arrived at some massively significant conclusion. Perhaps I tried so hard to leave behind the anxiety and noise trapped between city walls and pavements and heavy skies that I couldn’t help but see London in every orchard and churned-up pathway. I'd venture that this may be the same quandary that helps fuel the darker side of Larrikin Love's psyche, the one that can't help but spit bile and abuse at the Island that nurtured it, heard most clearly on 'Downing St Kindling' - "England has nothing more to offer me" the refrain that the calypso drumming, cowbells and swooping violins have been whispering all along. You get the feeling, though, that the home isle is necessary - as a muse and a ballast against which to push for the freedom they seek. It's notable that through the Libertines comparisons people rarely saw the debatable irony in Larrikin, their longing for sunny English meadows and shaded trees while Doherty bolted to the smoke. (For the record, there are about two lines on this entire album where the two frontmen and bands could perhaps be mistaken. Any similarities are more in the poetic romance than the sound, doubtlessly).

The grass is always greener? We'll see. All I can say for now is that this is exactly what it needs to be - an impressive debut, and nothing more. Which, to me, makes 'we'll see' all the more intriguing.