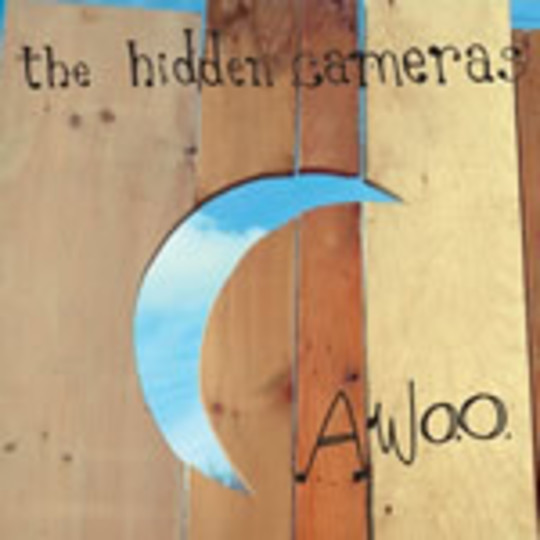 'Guilty pleasure': never has such a usually worthless description been so fitting. Okay, a poor introduction, but its hard to know where to start with Awoo, the third Hidden Cameras full-length to reach our shores.

Quality wise, Awoo is more than likely the best pop album you will hear this year. If you can avoid sneering at the Jimmy Somerville through a butterload of reverb vocals and the occasionally cringe-worthy lyrics (“Run with your pants down, with blood in the eye”), Hidden Cameras are heartrending. There is no dip in form throughout, from the hazy B&S-esque epic ‘Death Of A Tune’ to the bare-bones acoustic twangs of ’She’s Gone’, right through to the closing moments of 'The Waning Moon'.

Hidden Cameras obviously have strong roots in American folk music, and their songs tell stories in the traditional sense despite the subject material, but the songs branch out to an extent that defies their simplistic form, touching twee-indie pop and also the driving soft-rock of bands like Journey. It should be repulsive, but it's done in such an honest manner that it's impossible not to become infatuated.

Those who want to feel separate from the music they are listening to - those that view it as a distant object with a financial value - should look elsewhere. Those who want to embrace every digitally-encoded bit of sound that_ should_ be crackling from a wine-stained record player is advised to invest emotionally. A guilty pleasure it may be, but when the pleasure is as intense as this, quite frankly who gives a fuck?

The Way The Wind Blows