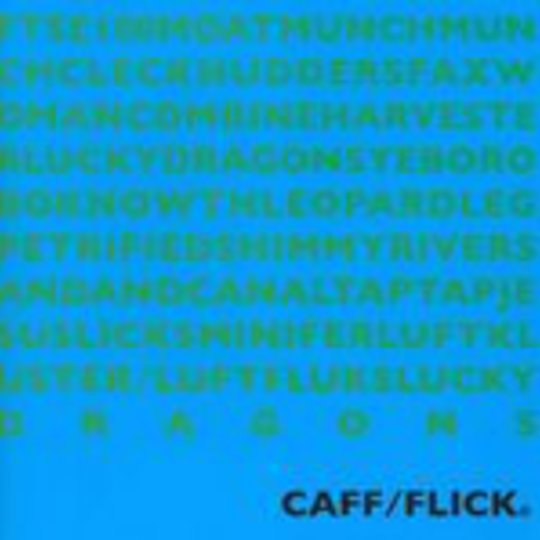 Collecting together label-less misfits from the UK and beyond, the newly conceived Half/Half label offer little information on the motives behind this debut compilation entitled _Caff/Flick_. However, whereas the mysteriously bare artwork and modestly minimal press release are inconspicuous, the seventeen tracks on offer here bellow the label’s motto like a foghorn to your ear canal: Half/Half are a _different_ kind of label with eclecticism in their blood. Psych-folk to lo-fi metal to drone to techno to whatever you can conceive…

London’s **Moat** are the first instantly recognisable talent at track two. Their brand of paranoid, clattering metal is perfectly suited to the tone of the collection and comprises an almost-companion piece to Paris’ **Petrified**. Along with Gojira, Petrified belong to the burgeoning French metal scene but while the former tread a 'traditional' route, the latter triumphantly incorporate a love of drill-bass into their brutal melodies.

**Lucky Dragons** contribute two tracks to the album, each what would now be called 'chip music' in our post-modern times. Its videogame samples are wonderfully kitsch and manage to sound interesting in a growing genre of Germlins and Shitmats. And then come fuzzy indie-popsters **Munch Munch** and **Cleckhuddersfax** who seem the most likely to garner attention in the future considering their relatively more accessible genre. Influenced by the current wave of epic pop coming out of Canada, if these two competent tracks are the first of more to come then they may just rival their predecessors' work.

The weaker tracks are most certainly the work of the freeform noise additions and the obscenely psychedelic folk; both genres indebted largely to the United States, the European attempts from **Leopard Leg** and **Combineharvester** are absent of the verve or imagination that one would hope to find stored away behind the walls of distortion. It’s the more traditional folk from London’s **Jesus Licks** and Reading’s **Tap Tap** that are sonically far more appeasing in the compilation’s environment - Jesus Licks bring to mind a mellower Life Without Buildings while Tap Tap are Man Man if they weren’t coo coo.

Special mention must go to **Luftkluster/Luftfluks**, who, despite contributing the compilation’s highlight with the avant-garde pop ditty _'We Pulled The Roots'_, don’t seem to exist - website links that lead nowhere, six measly results from a Google search and no sign of any previous work. If, in the future, they manage to transcend the spirit world through any number of dimensions and integrate with human vessels, I hope they put some music up on MySpace.

Whether in ten years this is lauded as the launch pad for many oddballs into mainstream obscurity or regarded as _“that compilation of demos Paw Tracks and Southern sent back”_ is impossible to determine. But when a compilation is this refreshingly barmy, it would be redundant to speculate. Press play, sit back, and wonder just what the hell is going on.