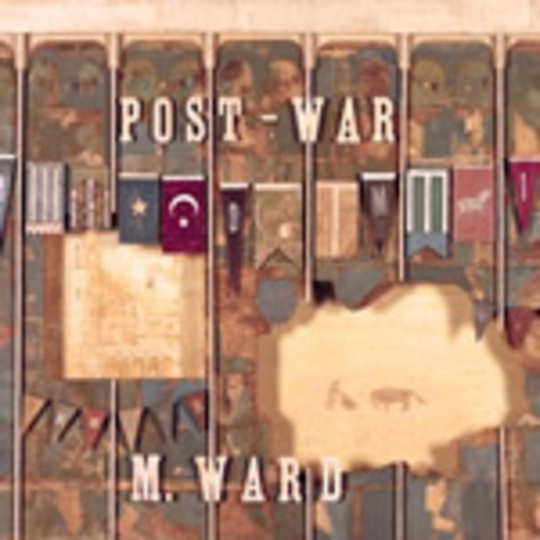 M. Ward and a motley assemblage of friends and well-wishers belt along the top of a cliff, pushing several pianos to the point where they will shoot off and fall into choppy seas of duelling toms and rollicking guitars. They are red-faced, grinning and straining, like people remembering the funniest joke they've ever heard whilst on a treadmill. This is what the most striking song from M. Ward's fourth album proper (and first for 4AD) sounds like. A wickedly see-sawing cover of Daniel Johnston's 'To Go Home', Ward sings _"God it's great to be alive, takes the skin right off your eyes"_, and by God he means it. Don't even suggest he doesn't mean each and every rich and crackling word.

Hearing Matt Ward's utterly spellbinding voice again, just over a year after Transistor Radio, is like welcoming a wayward lover back under your sheets, kept pristine and clean since the day he left. And listening to Post-War is like exploring those old curves and fleshy nooks you once knew by heart. Only - and perhaps here it's best to drop that particular simile - he's grown. More specifically, he's shelved those cracked radio tubes and invited everybody he knows to a Portland loft, creating his first true band record. He's backed by Portland locals Rachel Blumberg and Adam Selzer, percussionist Jordan Hudson, Neko Case and My Morning Jacket's Jim James among others. The Johnston cover is one example of how perfectly this all comes together, and while some tracks don't exude the same kind of enticing mysticism Ward excels at, _Post-War_ remains a warm, enjoyable listen.

'Poison Cup' is a hypnotic and bittersweet opening, laden with echoing timpani and the first taste of Amanda Lawrence's wearily beautiful strings. But there's barely time to collect your thoughts before 'To Go Home' and the grizzly fuzz-wrapped lament 'Right In The Head' bolt out of speakers propelled by duelling percussionists Blumberg (former Decemberist) and Hudson (former Thermal), who add a bustling, rumbling foundation to the bulk of Post-War. The newfound joyous distortion also rears its head on the gritty ramble of 'Requiem', Ward straining to holler the simple epitaph, _"He was a good man and now he's gone"_.

While it's good to see that the man who can master the achingly sorrowful can also pull together a serviceable sing-along like 'Magic Trick', its simplicity and _Sgt Peppers_ crowd noise lend it a throwaway quality. Fun, granted, but something of a regression also. The same could be said of 'Eyes On The Prize', an amiable but docile afterthought; or 'Rollercoaster', a shuffling ballad mostly saved by its beautifully cooing vocal harmonies and graceful piano. These are not bad songs necessarily, far from it in fact, but when they share the same forty minutes as a track like the fluttering, cyclical 'Chinese Translation', standards are raised a little beyond their reach. Similar to the gossimer glow of My Morning Jacket's 'Golden', it filters Ward's old-world charm through the assured force of his new collaborators - a description indicative of Post-War at its core.

It's a shame that a small amount of Post-War's songs have a rather meek 'but...' affixed after them. Meek, because however pale by comparison to their stronger neighbours they may be, they're still beautifully constructed and sly wonders to listen to. They're both a step forward in sound and a minute step backward in consistency, but still create an admirable, accessible addition to M. Ward's flourishing catalogue.