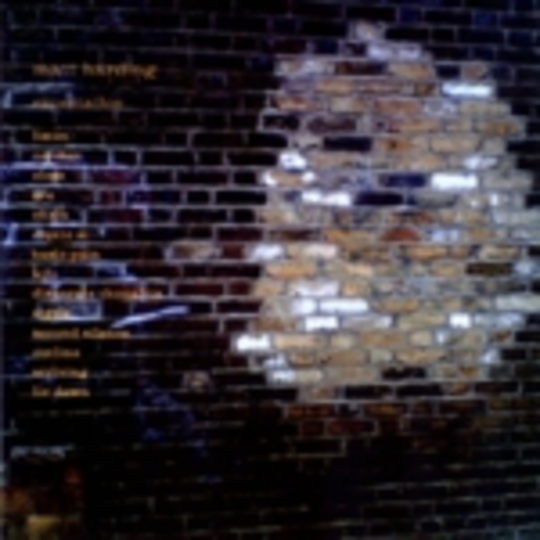 As strange an analogy as it might seem, Matt Harding’s Expectation is a mantelpiece ornament - a decorative piece, the product of someone’s careful craftsmanship, its fascinating detail intriguing to study for a set length of time. It works well sat on the edge of the room, quietly overlooking everything, but under close scrutiny, as you sit and stare at it, you’ll soon long for something a little more versatile.

That’s not to say Harding’s third Moshi-released long-player isn’t beautiful. Contained within its forty-five minute duration are fourteen slices of electronica, acoustic guitars and combinations of the two, drawing from several different influences. Often comfortable and occasionally enchanting, there’s a suggestion of the tender vocal touch of James Yorkston over acoustic guitar and violin on strongest track ‘Disparate Thoughts’, whilst elsewhere you may find stripped-down Dandy Warhols country, the new-folk feel of Eighteenth Day of May and Tunng or, at the electronica end of the scale, _‘Close’_ is a beat-led boy-girl duet with shimmering interludes that sound like Captain fraternising with early Hot Chip.

There are some interesting combinations of sounds to be discovered, but every so often Expectation draws a blank. Too many of its fourteen offerings seem to drift along aimlessly without a focal point, each often following the same structure from start to finish, beginning with a simple guitar line repeated over and over before drums, vocals or both join the fray and loop similarly until the song’s end. Whilst these particular songs are an ideal way to soundtrack your drift into slumber, they don’t necessarily endear themselves to the listener at other times. That’s not to say the formula never works: songs like ‘Signs’ adhere perfectly to it and draw you in with crisp beats and a thick vocal groove, but occasionally there comes the feeling that some magical ingredient has been forgotten.

Whatever the reason, it’s hard to feel truly immersed in Expectation. You can easily enjoy its finer moments yet while it softly, teasingly ruffles your hair throughout it never truly encompasses you with its beauty. Whilst you go about your work with the quiet, chilled loops and soft guitar patterns drifting on the air behind you, it will occasionally reach out with a luscious keyboard interlude or infectious melody, batting its eyelashes like a coquette until you grant it your full attention. But with a lot of repetition and a reasonably down-tempo feel, the mind may soon begin to wander; you’ll go back to your work, impatient and frustrated, only to find yourself eventually drawn back to the persistent, relaxing rhythm.

Too good to be consigned completely to the background yet not gripping enough to sit comfortably at the fore, Expectation seems trapped in a curious limbo.