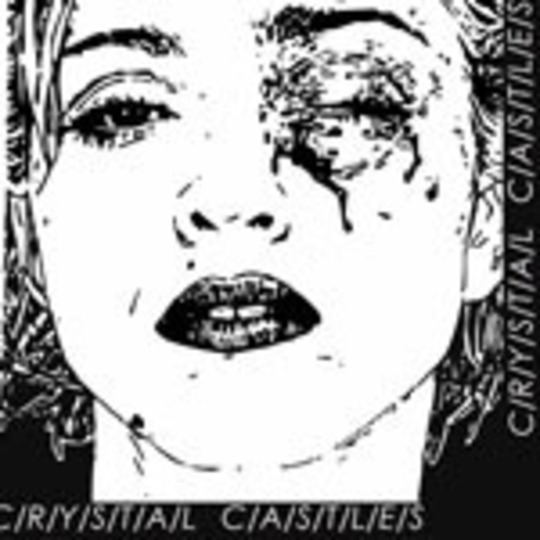 Crystal Castles are a boy/girl duo from Toronto, Canada. They're named after She-Ra's castle. After being directed to their MySpace by a friend and almost instantly falling in love with their stuff, it turned out they were playing Barden's only a few nights later so of course I went down for a look... Boy stands behind his laptop, hooded with glittery eyes peeking out from behind a scraggly beard. Girl jumps on the spot in a big baggy t-shirt, whip and wire thin and strikingly pretty, hitting keys and shouting through heavy distortion and the raging, nasty bitcore and pounding drums of the backing track. Between them, they create a pulsating, violent racket, structured enough to be a malevolent kind of pop, but fucked up enough to sound densely punky and sandpaper rough.

Their 4-track 7" EP, released on Merok, gets this fierce energy down on record perfectly. Alice Practice is hit and run electropop, flailing, pulsing beeps smashed over an evil beat and driven onward by an incomprehensible shrieked vocal. Love and Caring is it's even more evil twin, a battering ram of a song that goes straight in through your forehead, complete with the only clearly decipherable phrase of the EP, a left-in out-take in which Girl asks "what the fuck is.. oh, it's the bass". Dolls sounds like an end of level completion song from R-Type 2 or something (in a good way). 'Air War' is the cleanest song on here: a harsh, 4/4 beat and reverbed vocal layered up over more super-catchy pinging and computer game noises.

This will be right up there in the singles of the year for me, I'm sure. And with 200 of the 500 pressed copies selling out in the first day, you'd do well to jump on it quick if you want it. You can buy it via Paypal from the label's MySpace.