You Can Cry All You Want 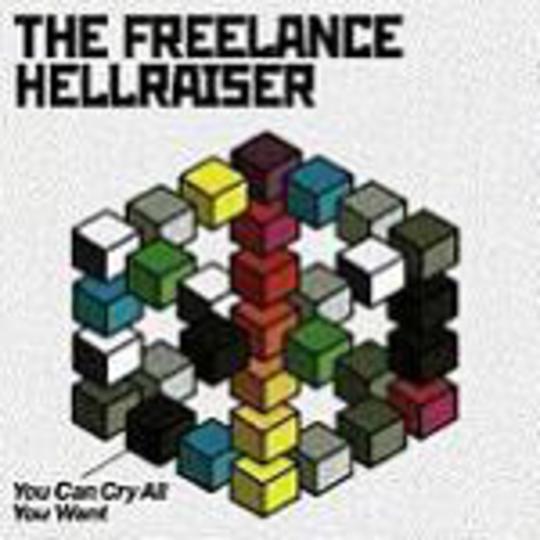 Oh dear, where did it all go bland for The Freelance Hellraiser? Near enough to half a century ago he was knocking out absolutely inspired (if cheesier than a sock full of Wotsits) mash-up wonders, and for a while was the undisputed bastard pop king that gave the likes of Soulwax, Richard X and Jacknife Lee the impetus to get indie kids dancing in a pre-electroclash dance demi-era. Who would have thought that sticking a Christina Aguilera vocal over a Strokes riff could not only work but ignite a whole swathe of bootleggers to stick two fingers up to copyright restriction? And what sort of ingenious mindset realises that the vocals to ‘Country Grammar’ by Nelly fit so grin-inducingly well over the theme tune to Grange Hill?

But no more, because now we’ve got plodding, insipid acid-lite of songs like new single ‘You Can Cry All You Want’. If somehow there is anyone out there still arguing that the art of mash-up isn’t really an art at all (i.e. that splicing two songs together isn’t really that creative) then they’re likely to be hushed by the sheer lack of imagination, guile or passion in this effort. It’s evidently attempting to be a dancefloor filler yet with heartfelt sentiment, but falters in using contrived lyrics from the Blunt school of songwriting (sample: “You can cry all you want but your crying won’t get you nowhere / You can lie all you want but your lying won’t get you nowhere”), and hence ends up coming across as too half-arsed to care. It doesn’t really help that it’s sung over an automatic-pilot synth backdrop so unadventurous in adapting its chosen style that it makes Zoot Woman sound like revolutionaries.

Added lyrical cringe-worthiness aside, B-side ‘Beautiful Girl’ fares much better, hoisting up the tempo and creating the sort of flared disco extravaganza that puts Justice vs Simian to shame and makes the Eighties sound like fun again. Shame it’s all too little, too late. As far as singles go, it’s back to the drawing board – now where did I put that Missy Elliot a cappella?

We Are The Pipettes