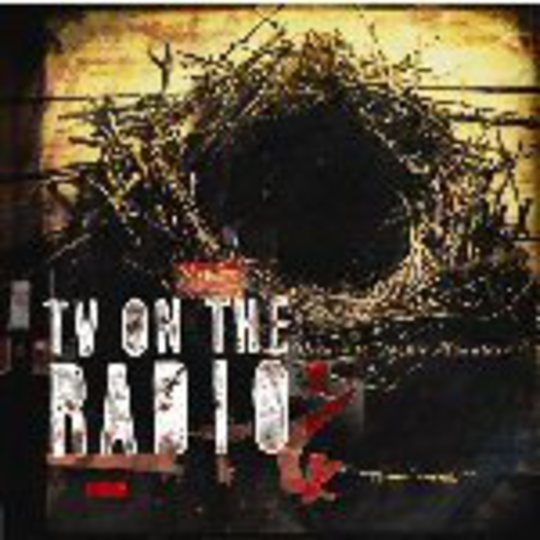 Picture the scene; a low rider pulls up outside a coastal strip-club in Santa Monica, the sun hanging between 6&8 above. One of the riders are drinking from a bottle of champagne, and the rest are grinning Cheshire-cat grins. But look a little closer; everything is not as it seems. Their grins are pockmarked with missing teeth and almost certainly chemically induced, the bottle of champagne is being clutched a little too tightly and the sun is about to become obscured by dark clouds.

If an image was worth any amount of words then TV On The Radio’s third album could be summed up with the above, as on the surface Return To Cookie Mountain sets the mind to images of a hot summer’s evening in California but deeper down there is a state of unrest; for a perfect example listen to the paranoid explosions of distortion underneath the shrieks of David Bowie collaboration ‘Province’, a song which would have been the result if Andre 3000 of Outkast had taken inspiration from Kevin Shields rather than Prince when creating ‘The Love Below’.

Further on set an ear the unsettling synthesiser loops that threaten to strangle ‘Wolf Like Me’ into submission. Descending from the relaxed nature of the albums opening triumvirate here the clouds that billowed in the distance now cloister and have turned soot-black, with lead vocalist Tunde Adebimpe’s shouts of “…been howling forever” searching for a full crimson moon.

It's this struggle between light and dark that makes …Cookie Mountain so thrilling; and this is evident not only in the music but the lyrics, which provide a perfect accompaniment. In ‘Province’ the opening pairing of “Suddenly, all your history’s ablaze/ Try to breathe, as the world disintegrates” stands out against the upbeat tempo and falsetto vocals, while ‘Playhouses’ offers some abstract views on alcohol.

Of course, TV On The Radio’s reputation has been built on their use of abstract ideas and unconventional instrumentation, and to an extent the follow up to 2004’s Desperate Youth, Bloodthirsty Babes and 2002’s OK Calculator is a more digestible album; it has a steady (and obscenely high) level of quality throughout instead of jumping back and forth between the peaks and troughs of genius and filler and has a much smoother flow, with the album feeling like a single piece over the mixtape like changes of its predecessors.

Yet there is still enough diversity over the album to satisfy even the most eclectic of tastes, and from the howl-along windswept pop of ’Hours’ to the shrieks and blips of electro-rock anthem ‘Let The Devil In’ and the storming post-rock of closer ’Wash The Day Away’ there is something for everyone.

Return To Cookie Mountain is a party soundtrack for a fucked-up generation and an opus that inhabits the midpoint between the scarcely conjoining circles of eclecticism and enjoyability whilst maintaining consistency throughout. Somewhere in the distance the dark is gathering, but TV On The Radio are absolutely phosphorescent.