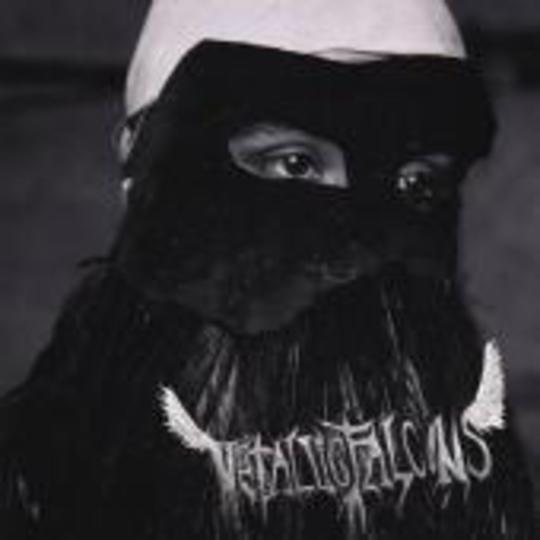 The mysterious cloaked figure on the cover of Metallic Falcons’ debut album arouses a distinct sense of perplexity and wonder, the hooded enigma staring blankly under a blackened sky eludes any thoughts that this may be an entirely simple affair and one with meaningless aura. This is the story of the desert, and Sierra Casady’s and Matteah Baim’s travels through a baron land of dazzling beauty. This is Metallic Falcons, the side project from one half of CocoRosie, and they are here to tell you their wonderful stories through the medium of empirical art-rock.

If the album's artwork and background weren’t enough to lure you into their world, then the opening track will get you hooked. Entering with layered backing vocals and a soft atmospheric soundtrack, the non-formulaic opener then develops into something totally different. Tender vocals courtesy of the pair slowly caress the desert air, before a fast punk ensemble is performed from across the canyon, distant and dripped in echo, setting the tone for the album – a creation of beauty, yet awash with fulfilling surprises.

Metallic Falcons' self-invented genre soft metal is evident on tracks like ‘airships’ and 'berry metal’, with the delicate guitar tones slowly brushing against the quiet drums, and the focus of attention on Sierra Casady’s operatic vocals. Unfortunately, the grandiose vision isn’t quite achieved, as the production alters their scope with a sound that detracts from the potential quality. It’s on the quieter tracks like ‘Nighttime and Morning’ that the production works as an attribute though, in this instance the voice of guest singer Antony Hegarty utters his soft and wistful vocals underneath a subtle crackle that sounds like it could have been made by the desert, but has in fact been created by its lo-fi production values.

The overall feel of the album is that you are encompassed in their world, in every whisper uttered, and in every haunting vocal echo. Every sound is shrouded in mystery, particularly in the track ‘Desert Cathedral’, where you overhear a conversation between two mysterious female voices, one symbolising the desert, and the other courtesy of a traveller who is told to watch out for the strong winds at night. Lyrically, the album takes on the theme of the Great American Desert, barely touching the introspective themes that could be thrown up from travelling experiences.

Guest vocalists Devendra Banhart and Jana Hunter provide worthy additions to the repertoire, with the latter bringing her prominent freak-folk vocal style to the track ‘pale dog’, breathing life into the album, and keeping it fresh and interesting. The albums subtle tones create a hazy atmosphere, and this often transcends to the listener, with the attention slightly wavering after many tracks built on lethargic noise - especially in the later half of the album. Despite the sleepy mood of the opus, every song is interesting and different to anything in the musical climate at the moment, drawing on influences from world music and modern metal while taking you to places previously untreaded.

The journey which the album takes is spectacular, with Desert Doughnuts musical beauty only matched by its lyrical themes, and the mystery of its curators. Rarely does an album involve the listener for its full length, but Metallic Falcons’ efforts are not wasted, with every sound special in its own way representing the desert in full glory. The album is truly stunning, and stands to be placed on repeat play for a long while, beating anything the CocoRosie collective could ever muster.