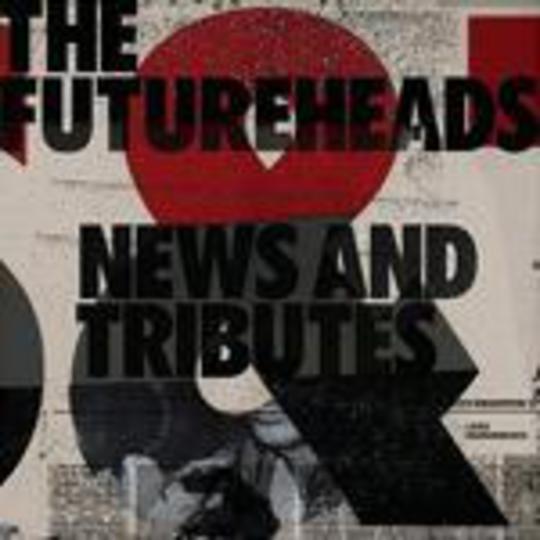 With News and Tributes, the band withdraw from the front-line they drew on 2004’s eponymous debut full-length - the press release confirming intentions to cut ties with the glut of wiry flinchers that The Futureheads have helped spawn. Before, it was crowded; walls built on sound built on head-spinning method and, rapidly, a labyrinth of ideas and caustic guitar was laid in lean tracks that fizzed out before three and a quarter minutes. Now though, their victory lies in their destruction of these walls and the creation of space – News and Tributes in some senses feeling like, if not quite a rebirth, then a cleaning of the slate for the band; a reclamation of the ticking heart at the centre of The Futureheads’ chassis but a break to some extent with the showy start-stop precision that marked the debut – in a nutshell, a surprisingly smooth continuation for the anxious noise of the Sunderland quartet.

‘Yes/No’ sets out with galloping drums that can and will eat miles from this freshly levelled ground, more direct than they have ever been before. Starting off distorted, getting louder and clearer so your ears can put them into focus…The Futureheads cut to the chase so that ground and glass can be eaten at once. Loud and triumphant, as an opening gambit it immediately drags the record up to sit between its first-song forebears both chronologically, (The Futureheads), and musically, (Silent Alarm). As the song fades out, the drums are still marching.

If the opener sees the band at their most direct, then the next sees red mists thicken to record levels. ‘Cope’, as well as ‘Return Of The Beserker’, sound like brattish exercises in noise dissipation; the exorcism of the git that became the zeitgeist. In the latter, skins are bruised black and blue and cymbals stress fractured, as Millard and Hyde gleefully wring out shards of diamond and glass, guitars-turned-daggers. This goes on for over two and a half minutes, as the band revel in the slight return of sonic oppression; tying you down and invading your personal space, as claustrophobic as sleep paralysis.

On the whole though, these songs are anomalies. The hours the four have spent locked away in rehearsal rooms at Sunderland’s City Detached Youth Project are well documented; ensuring a tightness and efficiency that must intimidate lesser bands. However, if there is one probable victim in that hardworking base, it must be The Futureheads’ soul. While trapped within the whirlwind of the debut, it was easy not to notice this deficiency – a deficiency countered, anyway, by the onscreen and on air ubiquity of borrowed work. The drawback of News and Tributes more relaxed pace, is that the underdeveloped side of their work is more exposed – the Futureheads soft underbelly seems too hardy to ever truly give anything away. It is a drawback accentuated by the mixing of a pop music aesthetic with grinding artrock musicality and the relative lack of depth typical to both genres.

There is a time on the record when it looks set to ridicule this assumption. In three songs – ‘Back To The Sea’, ‘Worry About It Later’ and ‘Favours For Favours’ – the band epitmoise the album; wailing their mournful hearts out as guitars fizz and chirp, downbeaten and wistful. The last song of that three in particular, matches ‘Danger of the Water’ in its eerie purity. It is truly a beautiful song, making a mockery of the entirety of my last paragraph, and sounding not dissimilar to North Eastern associates Field Music. This though, makes the lack of heart through the album as a whole even more frustrating – they just seem more believable on this particular track than they do elsewhere.

Weller’s influence is still evident – if ‘Carnival Kids’ contained traces of ‘Little Boy Soldiers’ then ‘Favours For Favours’ has just a pinch of ‘Girl On the Phone’. Also, the bloodlines furtively pencilled across to XTC since 2004 can now be cut in ink: ‘Skip To The End’ could be their ‘Making Plans For Nigel’, if the Futureheads ‘their’ wasn’t such a proud possessive pronoun anyway. The precision that the band has always practiced rises to the fore in this song – cut and dried when Barry Hyde curtly states “When I cut teeth, I cut to the root, then the end, is absolute”.

The Futureheads are a proper band, and if ever a band had earned the right to be referred to in the collective sense, it’d surly have to be The Futureheads. It’s just that sometimes their metronomic sense of timing and exactitude threatens to swallow them whole; individual personalities sacrificed for the good of the collective. That said, they have set themselves up intriguingly for the next record – and they impress more than enough on News and Tributes to keep me on tenterhooks.