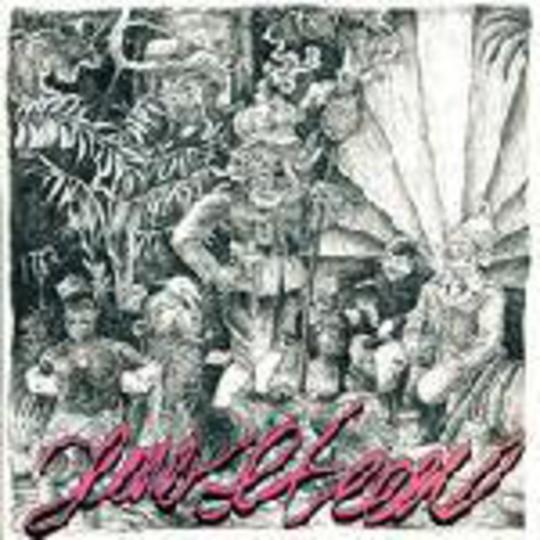 Act II: 'My Favourite Hat', in which the Xerox Teen loses his hat...His Czech Republican hat...His favourite hat...Was his no more. All these songs sound like they were written in the immediate aftermath of mugs of heaped caffeine. Before and after shots of incomprehensible nonsense floating adrift in a muddy sea of coffee. Evidently, it's a fine way to keep the Teen gears oiled. Theirs is a wonderful machine.

Hot on your heels, 'Darlin' busts from the traps spitting out the mph; 0-200 in six slinky seconds, Nuvo looping the bass like a tight wound engine belt and Pinstripe pounding out a beat that is most unrelenting. This is the Teen's rhythmic piston room, building up a head of steam that Danny Fancy and Uber then funnel out and release in cheeky whistles from guitar and synth, Dirt Dog Cash hupping and slurring over the top of the whole thing like a strung out Fonz.

"Welcome to the party, pal!

He's on the roof!

He likes your face.

As the song continues, you realise that this is less a car and more a battering ram. And the driver's panting through that grin he's wearing something maniacal. And now his stomach's dropping 'cos the coffee is wearing off.

'Sun Comes Up' sounds like it was set in last Sunday's Wild West if it ever had an existence behind Italian lenses. Now all the cameras are gone and the cowboys are old and their guns have been taken away, so they've got nothing to do but lounge all day on creaking porches or wander to skim stones in the parched creek. The dusty saloons are full of nervous eyes shifting awkwardly from one useless old outlaw to the next like two PTA mum's kids meeting each other for the first time. Draw! Inked in shapes and cartoon outlines. Heat stain silhouettes.

Orson played at Koko last week. The week before, Peaches Geldof, 17, was gurning for the guestlist queue. EXCLUSIVE! We got turned away at the door for not having ID. Oh, KLAXONS WITH PUSSIES! The lean meat on the indie rock bone is rotting like Ridley Road market, I reckon. So we'll let the blood fill their mouths while we head back underground with our counterpoint, and a squint back and a shake of the head in the general direction of those left behind. Smug?! Yeah! Who wouldn't be in these shades.