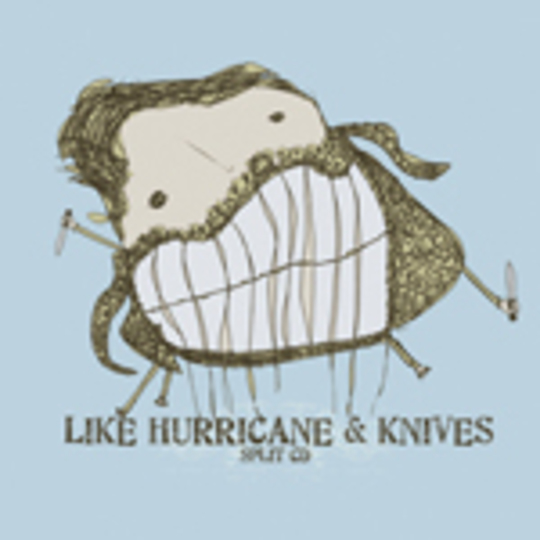 Not quite a coming together of North and South in the name of punk, this six-track split pairs Canterbury’s Like Hurricane with Birmingham-based Knives: that’s three songs apiece, ‘case logic’s failed to engage yet. Such releases are awkward beasts at the best of times: from the label’s point of view, do you twin acts that will compliment each other, or simply chuck two entirely separate singles onto a single disc to effectively halve production costs? The consumer, too, is almost always left disappointed, as it’s rare that both acts are of a comparable quality, whatever their musical directions.

Here, the label in question has clearly selected their chosen bands with scant regard for coherency: Like Hurricane chop at their guitars with subtlety and grace, while Knives are considerably more hostile in their bludgeoning. It’s the former act that instantly appeals over their split companions: intricate without ever getting their fingers tied up in knots, Like Hurricane’s trio are worthy of repeat listens, neatly recalling a dozen acts from intelligent indie-rock’s past without once brazenly shoplifting.

Although brutal in their delivery, Knives’ three helpings do merge into a single whitewash of pedal-stamping fury and bluster – it’s difficult to identify anything truly unique in their never-ending (although occasionally waning) assault. They sound as if they’d slay in a live setting, but so far as this release goes they’re the unfortunate losers of a contest that never was: voting lines closed fifteen seconds into Like Hurricane’s opening ‘Signals Collide’.

Consumers, then, purchase with caution: although glimpses of quality litter this release, consistency is never once evident.

Every Move A Picture