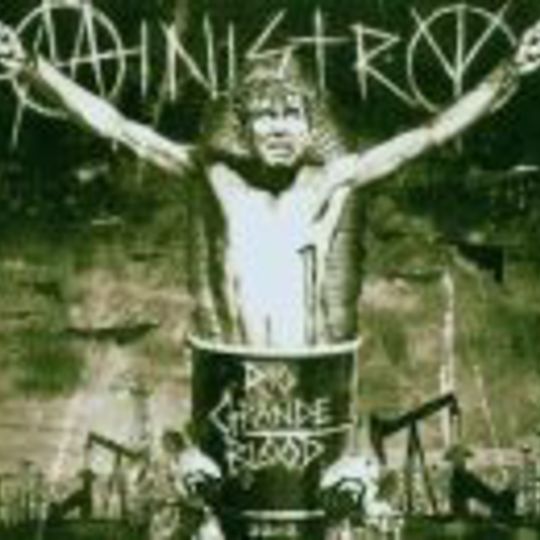 Back in the spring of 1972, ZZ Top were releasing and promoting their second album - Rio Grande Mud. Little did they know that 34 years later, a political activist and former drug addict would be parodying the album in order to create a savage recording of metal and affronted ramblings. Of course, ZZ Top wouldn’t have dared use a drawing of the American president with a crown of thorns on his head, as this would have caused controversy; but we live in different times, and Ministry vocalist Al Jourgensen's efforts are arguably justified.

After ten studio albums, you know what to expect from a Ministry purchase: the usual pulsating rhythms, industrial loops, coupled with chief mentalist Al Jourgensen's spitting vocal style. This formula has worked well over the years, particularly with their landmark record Psalm 69, and Al isn’t ready to alter it for anyone. The thrash noodlings of the title track get the proceedings underway, followed by the highlight of ‘Senor Peligro’. Both of the aforementioned tracks are dark, brooding epics, awash with manipulated samples and plethoric guitar noise, which is nothing less than outstanding. The music put forward here is rapacious, which serves as a timely reminder that the only industrial band you need is Ministry, fending off even the best of copycats. The openers keep to the developed Ministry style, which will please both fans and newcomers alike.

Punk legend Jello Biafra (Dead Kennedys) joins the band on ‘Ass Clown’, and is everything you would expect from a collaboration of two pioneers of modern rock music. While the track is awkwardly titled, the music contained within is an onslaught of metal riffs and uncontrollable rage, and works brilliantly as a late highlight. Unfortunately though, as highlighted on this track and almost all Ministry songs, it is noticeable that there is a distinct lack of any melody. While Al implements melody more on Rio Grande Blood, it is unfortunate that it only occurs on sporadic occasions.

“I’m ready to die” shouts Jourgensen on ‘Gangreen’. It's fantastic stuff, and with new boys Tommy Victor (Danzig) and bassist Paul Raven (Killing Joke) providing some quality backing, Ministry are more awake than ever. Both players are competent enough to add to the Ministry sound, especially Victor who ditches the computer-aided licks in favour of traditional metal riffs more suited to Ministry’s industrial thrash style. Al’s vocals come up trumps on the album, and at 48 years old, you have to hand it to the man for having the energy and aggression of a young upstart.

Something that has to be noted is Al’s lyrics. As you can see from the front cover, George Bush and the American government are an immutable theme, but unfortunately his political anger occasionally borders on the inane. The topics behind it are not to be overlooked though; without Bush’s objectionable actions we might not have a Ministry so angry and pumped up, a Ministry intent on making a modern metal album so brutal and honest via a furious industrial stomp. The songs are perfectly crafted, and the production values are of a consistently high quality - something you would expect from a band that have pioneered their field for so long.

The album is a gun to the head - it will take you in, and you will be forced to make a decision: either succumb to the power of one of the best metal bands of the last 10 years, or ignore it and lose out. The first is more likely, as Al Jourgensen leaves no-one behind, and it is an alluring prospect then that Rio Grande Blood is significantly more powerful than Rio Grande Mud, and oh so much better.