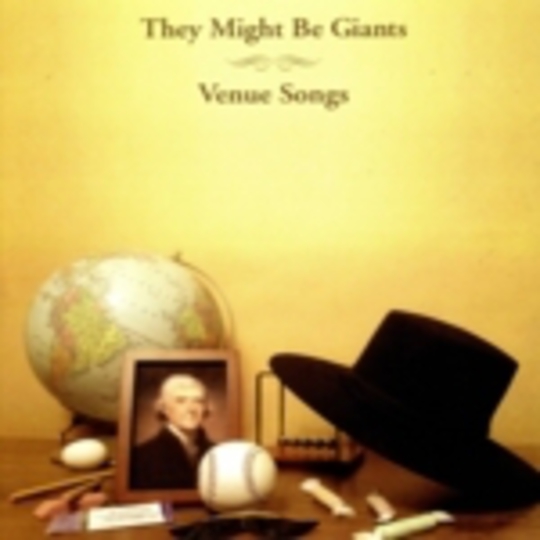 I close my eyes as forty-six soundbites lay siege to my frontal lobes, visions skipping through my memory. I feel slightly drained, despite spending the best part of two hours static in my chair just watching, listening. The culprits, just like the last minute plot twist of your favourite thriller, are the ones you'd least expect – not many would consider They Might Be Giants capable of brain-imploding genre-hopping, yet with the re-packaging of their Venue Songs album into a CD/DVD package they have set themselves to overdrive.

Venue Songs' concept is simple, if random. On a thirty-one date tour of North America and the United Kingdom a few moons back, TMBG wrote one exclusive song for each venue - written on the bus, rehearsed during soundcheck, played once and then discarded. Contained on this new release are the thirty-one tracks from the original CD, plus studio versions of ten of them deemed either weird or wonderful enough to be committed to tape, and music videos of eleven of them on the DVD, which is nicely crafted rather than cobbled together.

Humorist John Hodgman is employed to play a ‘deranged millionaire’ who set the Giants their challenge, and as a result the segments between music videos are smooth, the well-written script explaining various accounts of history for each place they visit – some real, some ridiculous. The videos themselves share mixed fortunes. Ranging from the amateur to the professional, from 50s-style to stop-frame animation, there are some good ideas locked away here. 'Asheville', the song about a lover being discarded like the peel from an orange, sports a video where our narrator's head is indeed a peeled orange, whilst everyone else walks around with their fruit-heads still intact, whilst cult Internet animators Homestar Runner's Flash video to 'Experimental Film' will appeal instantly to their followers but might not be appreciated as much by anyone else.

The venue songs themselves are where the mind-bending genre-hopping and the blown mental fuses begin: of course there are the standard, ‘Boss Of Me’-style songs, twee US pop-rock set to jangling guitars, accordions and tambourines, but then there are the bluesy numbers, the country songs, soft ballads, the twists of jazz, the synthed-up disco moments and the thirty second clips of Seventies psychedelic space-rock. It isn't just thirty-one glimpses of 'Birdhouse In Your Soul', there is an large amount of variation, not to mention ambition. As all tracks try to make their point simultaneously, they make tiny indents in your memory, and the only way to escape mental indigestion is to hold your breath, put your head down and absorb.

At first listen, it's a lot to take in, but it gets easier each time as you ignore the throwaway songs - after all, when you're writing a song a day you're hardly going to strike gold every time – and concentrate on the ones which mean something. The same applies to the videos - you'll have your favourites, the rest you can discard, until eventually Venue Songs becomes a more manageable size.

A word of warning though: the forty-six tracks on the CD clock in at under seventy minutes – some songs barely brush thirty seconds and rarely trouble the two-minute mark, so it might be too fleeting for some. Also, unless a European release materialises, the DVD's colour is encoded in the US-standard NTSC, rather than the Europe-friendly PAL format, which means some will find it hard to view. In any event, the CD-only version would still be a worthy investment. Anyone wanting an epic should look elsewhere, though.