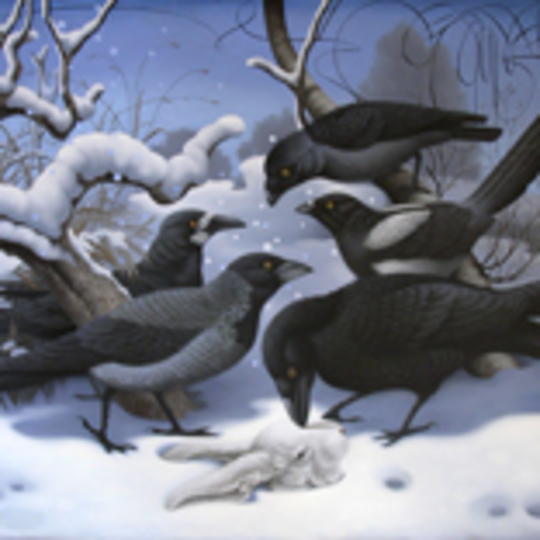 With all of Lisa Germano's work comes the feeling that she's addressing only herself, with that conversational approach and those near whispered vocals. Whatever consumes her thoughts on the day to day will eventually find their exit through one of her songs.

In the build up to In The Maybe World, Lisa's been deep in thought about death, separation and distance. Her darling, oft' written about cat Miamo-Tutti has died and she touchingly wishes him safety on his tour of the heavens in 'Golden Cities', which chimes and tinkles wistfully as she misses her puss. In a gently grandiose Broadway style, 'Too Much Space' covers the same subject but from a less pragmatic angle:

"You gave it up, he hit the dust / and now your heart is made of rust. / You took a plant and put it there."

Songs glide from one into the next without rippling the water too much, with her customary close-mic, breathy vocals, this time touched with the lethargy of loss, joining the seams. She recalls Jeff Buckley on 'Except For The Ghosts' - she knew him personally, as they would find themselves playing the same places in the early 90s. Lifting the funereal pall reveals something weirdly hypnogogic in the shape of _'In The Land Of Fairies'. Written in an unusual key, it transverses weird fantasy dreams containing monsters, ogres and fairies that find their roots nearer to home than first thought, much like works by the deranged Victorian artist Richard Dadd.

From here, In The Maybe World stoically begins to put Germano back onto her feet again. 'Wire' houses a winsome desperation; 'Red Thread' less so, especially with its sweetly breathed, vengeful chorus: _"Go to hell / Fuck you." Go girl!!

Like the closing scenes of a wholesome, worthy art house flick, the album ends on a relative high with Germano's inbuilt pathos remaining the central element. The balancing of ironic humour that raised a smile on earlier albums is absent here, which leaves us with almost nowhere to hide. Germano is as she is, so whether this is part of her ongoing maturing or a sideways stock-taking step to a sombre offering, I can't imagine she'll be too concerned with labels - she is, after all, writing for herself.