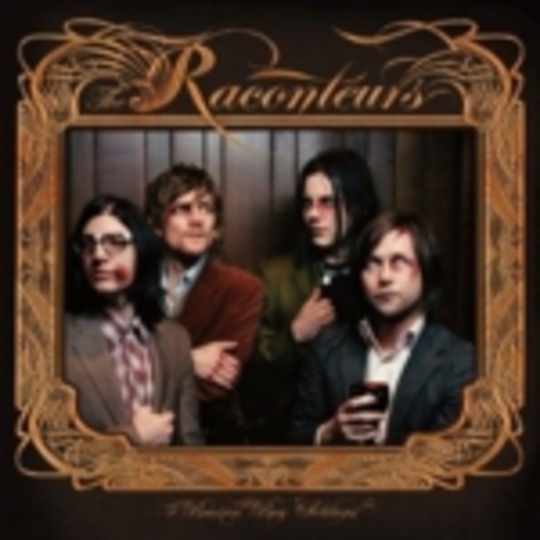 In hit single and album opener ‘Steady, As She Goes’, The Raconteurs have crafted what must be one of the standout pop songs of 2006, as a simple bassline and kickdrum combination, courtesy of Jack Lawrence and Patrick Keeler of 90s rockers The Greenhornes, gives way to a perfectly balanced musical marriage of Brendan Benson’s saccharine pop hooks with Jack White’s edgy vocal style. If this is an indication of the quality of the ten songs on debut album Broken Boy Soldiers, then surely The Raconteurs are about to blow Fall Out Boy back to the pit they crawled from and claim the title of Biggest International Breakthrough Act of 2006. But it’s never that simple, is it?

You see, despite ‘Steady, As She Goes’ being the most fun your CD player can have without the need for a post-coital cigarette – DiS, incidentally, does not endorse the forcing of cigarettes into electronic equipment – it is a formula visited just once for the remainder of the album, on probable future single 'Intimate Secretary'. This is probably a calculated move: whilst you get the impression that Brendan Benson could quite happily churn out serving after serving of glossy guitar-based pop-by-numbers (and has for many years), Jack White has always cut a more varied songwriting figure. It is a surprise, then, that at times it would be easy to mistake Jack White as a mere special guest rather than co-writer, as songs like pop gem ‘Hands’, ‘Call It A Day’ and the acoustic-led ‘Yellow Sun’ barely show White’s influence at all, and could have been culled directly from Benson's previous album The Alternative To Love.

There is another side to The Raconteurs, though. Far away from the gleaming pop lies a much more complex side - a foot-stomping, tie-dyed, long-haired hark back to 1960s psychedelic rock led largely by White. The Led Zeppelin-esque third track ‘Broken Boy Soldier’ stands out particularly, as White’s reverberating vocals peak on the desk, distorted at the edges, his high-pitched voice fracturing occasionally over swirling Hammonds and kick-heavy, thumping drums. It’s all delivered with such gusto on White’s part that he’s in danger of making Benson look pedestrian.

Although for the most part psychedelic fury or unbridled pop, Broken Boy Soldiers isn't entirely uptempo. As well as a Benson/White ballad, 'Together', in the middle of the album, closing track 'Blue Veins' detracts the rock and ups the drug intake, inserting into the introduction and instrumental break reversed sequences of music that include White's straining, haunting vocals, leaving it eerie and tripped-out despite having the same groove as Sam Brown's 'Stop'. Of course, the various styles leave Broken Boy Soldiers slightly less accessible than ten variations of 'Steady, As She Goes' would, but with repeated listens it goes from strength to strength.

What you make of Broken Boy Soldiers will largely depend on the angle from which you approach it and as such, the rating at the bottom of this piece is more a guide than a verdict. Given the artists involved and the hype that was bound to ensue, this album could never cater for everyone, and clearly it was never set to become the Nevermind-ousting symbol of a musical generation that some suggested. Amongst its inevitable critics, supporters of Brendan Benson’s solo work may take issue with the psychedelic wig-outs, whilst those hoping Jack White would drag Benson’s happy, clappy Beach Boys pop into an alley and give it a lesson in White Stripes’ twisted reality might end up disappointed with how light-hearted the majority of it sounds. Others will take issue with its occasionally uninventive lyrical stance ("I've got a rabbit, it likes to hop/I've got a girl and she likes to shop" being one of the more painful instances) and grumble at how it all could've been much better if they'd just taken it more seriously.

Perhaps the point is missed. This is all _Broken Boy Soldiers _was ever meant to be: an off-the-cuff collaboration between two friends and one which, despite its imperfections, is an effort worthy of applause.

The Zutons, Larrikin Love at Octagon at Sheffield University, Sheffield, Thu 04 May