Kick Out The Grams/Postmodern Stars 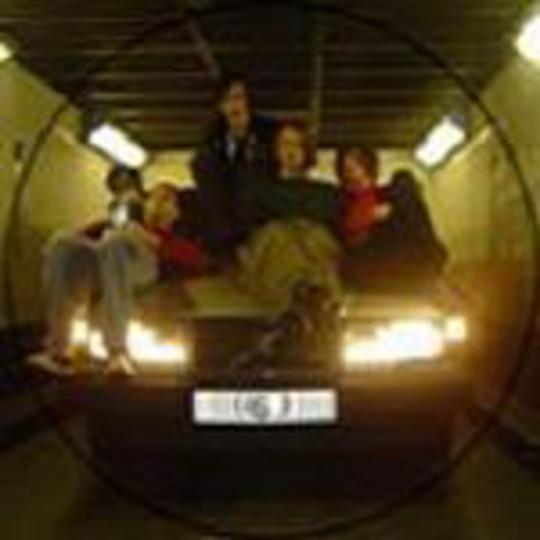 The Oxfam Glamour Models are on a one-band mission to stop rock music stinking quite so highly of scenesterism and smack, extolling the virtues of Stopping Being So Fucking Silly. And they intend to do so by means of the mediums of snide satire, explosive live shows, a love of the half of Brit Pop which hasn't yet been recycled to the point of inanity - and, of course, some rock'n'roll noise. The AA-side on here is a tad disappointing, sounding like something Suede never got round to writing and thus feeling a tad unexciting (although seeing as the song's about everything having been done before, maybe that's the whole point and I'm just not postmodern enough for it).

The A-side, however, is an entirely different kettle of glittery secondhand platform shoes. It's a spiralling, richocheting, distorted chaos of shiny, tangled riffs which wrap round and rebound off each other like some kind of glamorous space-age dogfight. Fast, bewildering and strobe-lit, it's a hi-speed glam rock punk mess which seems to sneer at the very styles it's plundering - while making sure to save plenty of humorous bile to spit at the Doherty-inspired high-maintenance nihilism which such a discouraging number of people aim to emulate.*

Admittedly, this record isn't quite transcendent. But it is energetic and inventive and wild-eyed and noisy and suggestive of glamour and attitude - and, what is more, it manages to showcase a glamorous-sounding song about an unglamorous situation without accidentally infusing the subject matter with any of the merit of the music. For which: Respect.

*And which is, I feel, a rather worthy target. Surely it's about time we sought out some heroes who're good at something requiring a tad more experience and talent than Courting Death? I mean, being dead isn't difficult; in time it comes naturally to everyone. Here's to people who've mastered the rather more difficult art of coping with living...

Try This On Your Piano / Look At My Furrows Of Worry