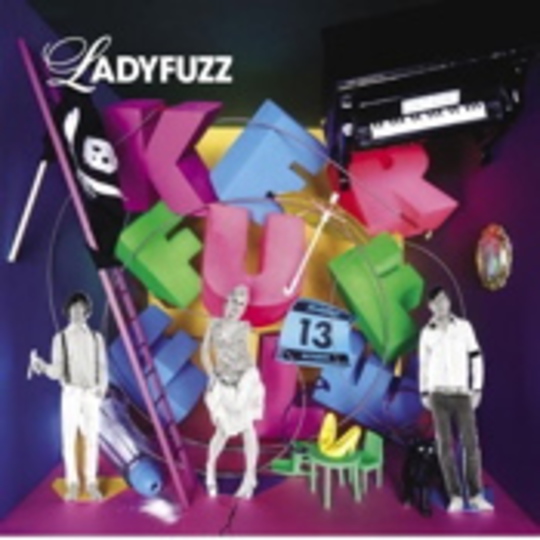 The excitement and anticipation before this record dropped onto the welcome mat could probably be sensed throughout the Greater London area. Or, at the very least, by the chap in the flat upstairs who banged on the ceiling to drown out both my slightly excitable feminine squealing and the noise that my dancing feet made on the laminate flooring. To be fair though, the chap upstairs showed wonderful taste in the long run, as his banging ceased when I finally put the album on and turned the volume up.

My reaction to receiving this record was borne of three things. Firstly, the fact that this record feels like it's taken so long to arrive; Ladyfuzz have been turning heads around London since they formed via an NME ad in March 2004. Secondly, the fact that the three singles released were such captivatingly brilliant three-minute blasts of pop delight, it became impossible not to yearn to own and listen to EVERYTHING this band produce. And thirdly, because of the wonderful live show that Ladyfuzz put on, both simultaneously seeming unhinged and perfectly planned and executed.

The focal point of the live show and the most immediate thing you notice about the album is the voice of goddess-like Austrian front woman Liz Neumayr. It's easy to dismiss Ladyfuzz as just 'another female-fronted band' on the back of this, and the comparisons that they have received to date bear this out - Yeah Yeah Yeahs, The Slits, Elastica to name a few - but there is much more to Ladyfuzz than just Liz as delving further into the album reveals. Matt Lord's guitar lines wind brilliantly around Ben Esser's wonderful thumping drums and the overall effect is of something that, yes, is close in effect to the Yeah Yeah Yeahs, but is also satisfyingly independent in its own right.

This is an album that, at heart, is just pure, shimmering pop. From the glorious vocal gymnastics and catchy chorus of opener 'Hold Up' (think faster and thusly better Bloc Party basslines with Ari Up exercising over the top), through handclap-tastic Tom Vek-aping 'Monster' single, through to the quite frankly astounding 'Immer Diese Liebe', which starts off like a Shed Seven single for about five seconds and then turns into something so eighties that it could have soundtracked any John Hughes movie, this album is one that doesn't just get your foot tapping, it takes your entire leg off and uses it to slap non-believers in the face.

My only criticisms of this album are on the surface, I think. You get the impression at times that it has been so carefully produced that certain little nuances are missing. I'd have liked it to be a bit more ragged, a little more on the edge. You do feel at times that Liz is holding something back, and that if only she could let it go that the resulting screaming and wailing noises would improve the album and your life. But then, I suppose, the beauty of Ladyfuzz both as a live band and on record lies in the outer perfection, and this certainly has a lot of that.

Sure the singles stand out at first - but that's only because I've played them so much that I think I've worn grooves in my iTunes. But this album is, once you've given it the attention it demands, the most rewarding 37 minutes so far this year. I'?ve already found myself wandering down the round humming two songs off this album at the same time already this week - I just wish I had enough compartments in my brain to hum all eleven.

I can only hope that the rest of the country wakes up and stops banging on the ceiling long enough to give this record a listen, because it's more than worth it.

Spiderz In The Bar (Part II)