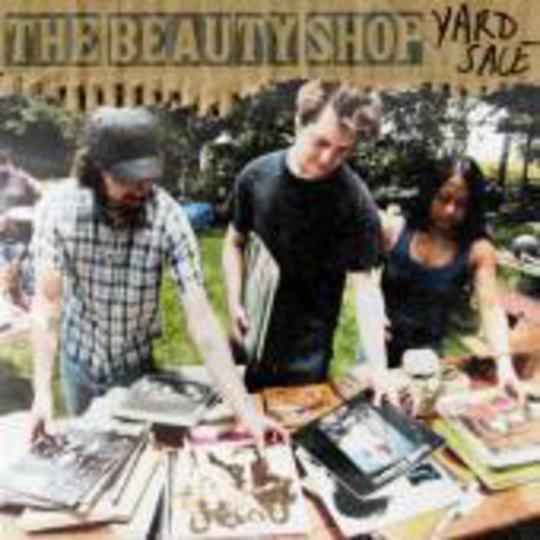 To pigeonhole Illinois trio The Beauty Shop as just A.N.other alt-country collective would be nothing more than a great disservice. Instead, their mostly downbeat, downtrodden blues-tinged fables are deserving of much higher accolades, as singer John Hoeffleur could easily be the half brother of both Conor Oberst and Stephen Pastel if their respective parents had got it together three decades ago.

Ever since the release of their debut album 'Yr Money Or Yr Life' four years ago they've been one of the US underground's best kept, yet most revered secrets, and the prolongued despair of follow-up 'Crisis Helpline' only fuelled the already well-stoked fire that these treasures may sound like they're about to meltdown but surely there must be something more hidden amidst the seams of the trove?

And then it went a bit quiet.

'Yard Sale' is a compilation of the best bits of the first two albums, and paints Hoeffleur, bassist Ariane Perlata and drummer Ben Ucherek in the role of the second coming of Galaxie 500 if they'd been reared on Johnny Cash and Waylon Jennings rather than My Bloody Valentine. That's not to say that parts of the album aren't enhanced by the unexpected arrival of glacial sounding overdrives, such as the poignant epic 'The Love I Could Not Save' which closes proceedings.

Elsewhere the delightfully monickered 'I Got Issues' and upbeat grit of 'Babyshaker' reveal a Hoeffleur at his most serotone stable, which may cause gasps of exasperated disbelief, but one listen to 'A Desperate Cry For Help' and its "What if every dream I have ends in bitter sorrow?" refrain or the maudlin 'Science Lights' ("Nowhere to run, nowhere to hide, you can't come see this suicide...") suggests that the mjority of The Beauty Shop's output is shrouded in trouble, misery and regret.

By the time the last few bars of 'The Love I Could Not Save' bring the record to a close, any thoughts of happiness and glee are quickly dispelled, and yet through it all Hoeffleur must retain a pretty vivid sense of humour. I mean, no one can have that much bad fortune in one lifetime, can they?

Why Won't You Give Me Your Love?