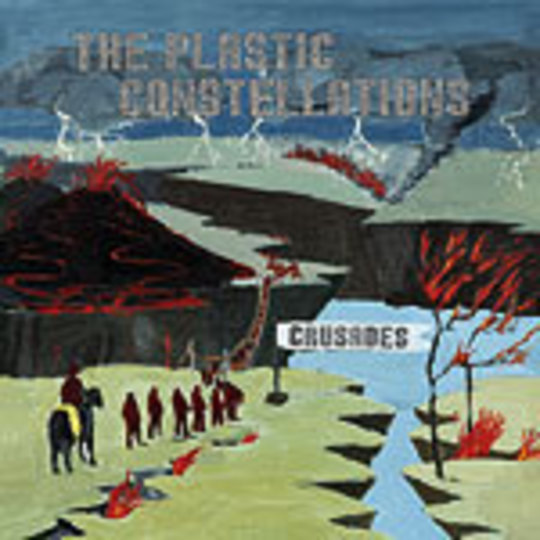 Super-catchy but compositionally complex enough to appeal to the bearded ATP-ers among the Frenchkiss label’s fanbase (gosh, spot the stereotype), The Plastic Constellations plunder the past in earnest for inspiration on their second long-player. It’s unlikely that anyone previously exposed to bands featuring J Robbins or Bob Nanna won’t hear echoes of a number of cherished-but-departed acts during Crusades’ 35-minute duration.

A punk band with pop at its core, The Plastic Constellations’ Modus Operandi appears to be combining sing-along, gang-vocal choruses with lyrics just the right side of ambiguous and verses characterised by intelligent breakdowns. It’s a mix that works well throughout, although absolute standouts are rather few and far between; that said, it’s the album’s high level of consistency that ensures that only the very best songs comprise relative highlights.

‘Sancho Panza’ is one such selection: urgent without ramming a dozen notes a second down the listener’s throat (which is no doubt consumed by a lump, a by-product of reminiscing over those old Burning Airlines and Braid records), it packs infectiousness beside awkwardness to produce a handclap-happy, hip-swinging result. ‘Men In Dark Times’ is similarly appealing, although its frantic delivery is more in tune with Q And Not U’s mid-career work than any originator of emo as we know it today.

Quite obviously one of Frenchkiss’ more immediately accessible acts, those expecting Les Savy Fav-level brilliance from The Plastic Constellations will be left disappointed. If it’s quality pop-rock you’re after though, with just a dash of the right retro influences, then you needn’t listen any further than Crusades.