On A Bridge Between Clouds 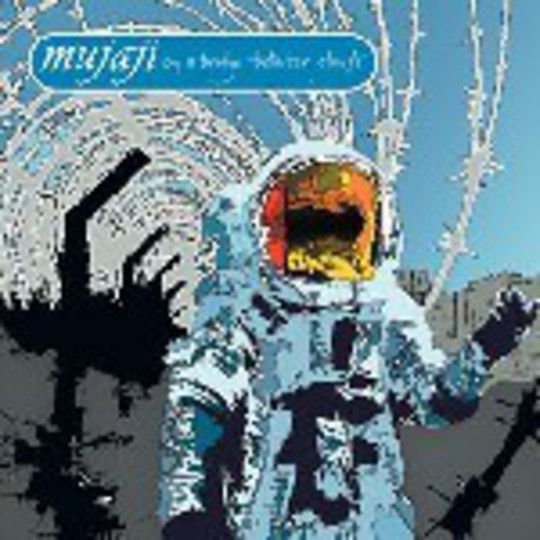 Listening to On A Bridge Between Clouds is like being intently aware of your breathing for half an hour; it becomes a hypnotic exercise, and you start to wonder what will happen if you stop. Fine-grained, gravelly vocals filter through the record like rice through a colander and incongruous lyrics humming through a veil of varied, moody instrumentation; out of it all rises a collection of very considered, aerated songs. Though Mujaji are ostensibly based between London and New York, there's a distinctly Scandinavian feel to the record, from the trip-hoppy tics and airy sense of pace, reminiscent of Norway's Subgud, to the inclusion of Norwegian singer-songwriter Maria Solheim on guest vocal duties.

Its darker reaches balance unsettlingly low, indistinct basslines with subtly discordant samples and Jed's knowing vocals. The resulting, sly sense of calm is peturbing rather than welcoming. 'Finest Role' is eerie, loose hip-hop beats laid to rest beneath Jed's vampiric voice, slowly beckoning: "Stay and lose control / Play your finest role / We are only animals." For a record largely programmed rather than played, it sounds impressively organic - no tinny, plastic synths or amateur beats here. Its lighter moments, however, conjure the notion of Josh Rouse fronting the Sundays, singer Jed adopting a reflective rather than predatory stance, his vocals fluttering over blissed out instrumental twinkles and airy acoustic guitar.

At its outset it's a very sensual, unusual record, but halfway through it loses its touch. The repetitive 'Cellphone' attempts the same fuzzy, slightly discordant whimsy as 'Finest Role', but suffers from clumsy, unrhythmic lyrics, overkill on the funny noises, and most damningly, a lack of ideas. The velvet underside that gives the earlier tracks such a rich, furtive texture wears thin, leaving weightless songs that warrant little more by way of description than that hated word, "mellow". Oddly the title track, Maria Solheim's sole vocal outing on the record, seems to mark OABBC's creative horizon, beyond which all its inspiration and charm disappears. Yet it's a gorgeous song, Solheim's vocals tripping fancifully across misty swoops of melody, and all of it reminiscent of Arts & Crafts lot Stars. It's a shame the momentum is so quickly and irredeemably lost thereafter; if Mujaji could have distilled the same otherworldly, unnerving essence throughout the whole record, On A Bridge Between Clouds would have been an impressive album.