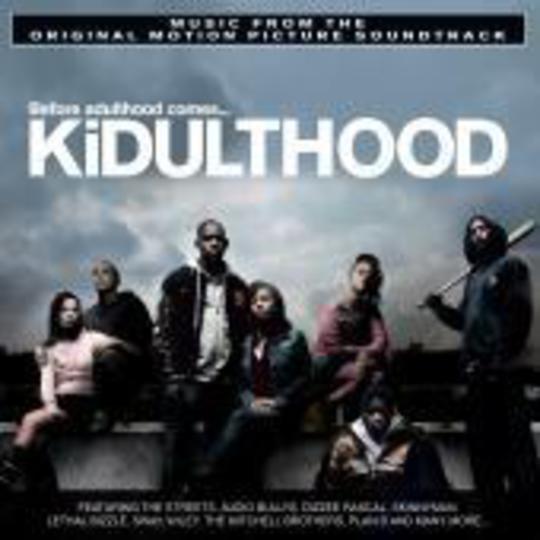 Apparently, Kidulthood, the movie, arrives on a wave of controversy – the powers that be, whoever they may be in this instance, are uncomfortable with the film’s brutality; with its not-wholly-accurate depiction of underprivileged council estate kids killing time violently. The soundtrack, though, plays things strictly safe, compiling a roster of acts that balance each other out well: for every virtual unknown, in the mainstream at least, there’s a big-hitting top-ten act. On paper, all is good.

Through speakers, too, the line-up is decent – the bursts of incidental music (by The Angel) and skits are unnecessary, really, and equal skippable interruptions, but whoever selected the tracks proper deserves hearty congratulations. The overly self-congratulatory acts aside – those that blatantly and unashamedly rip off aspects of US gangsta rap with celebratory talk of money and material possessions – this is a worthy representation of the state of British hip-hop and rap in 2006. Of the well-known names, Dizzee Rascal and Roots Manuva shine magnificently – one can never tire of hearing the former’s hyper-kinetic ‘Jus’ A Rascall’, while the latter appears twice. His own ‘Witness’ remains absolutely majestic, a true highlight of British hip-hop’s history to date, and he contributes intelligent prose to The Cinematic Orchestra’s ‘All Things To All Men’.

Ignoring weak efforts from Audio Bullys and The Streets, attention is turned to the acts who haven’t yet enjoyed a major breakthrough. Sway is on the brink, as is Plan B, but neither make an impact comparable to that of Shystie’s ‘Woman’s World (Gurlz Stand Up)’. A twenty-first century ‘Wannabe’ for those left utterly limp by Girl Power, it’s a startling exercise in talent over temper, its lead protagonist leading an inspired front line in the rap battle of the sexes. Skinnyman’s tender ‘Day To Day Basis’ is touching, too, a tale of a man not wanting to leave the crumbling tower block he calls home, even if the grass is greener on its other side, simply because it’s just that: home. It’s neither falsely celebratory in its articulate rendering of estate life, nor does it disrespect without thorough calculation: it tells it like it is, straight down the line, and is all the better for its honesty.

Like all compilation albums, the Kidulthood soundtrack suffers from highs and lows. Balance, though, is easily maintained, meaning that a peak of no little scale always follows each trough, however small. Worth checking out regardless of whatever hype surrounds its parent film.