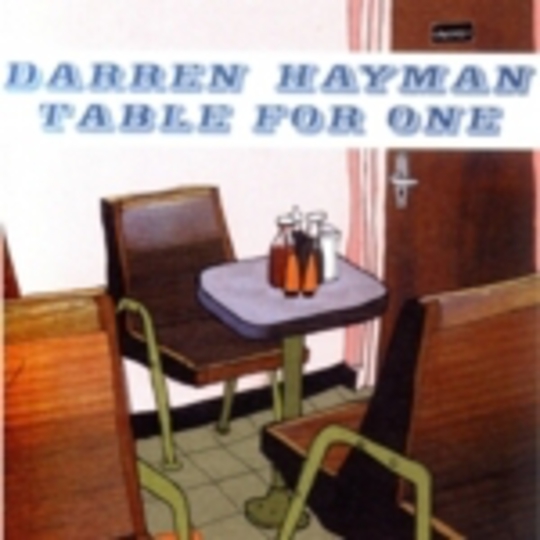 Darren Hayman has become a storyteller. Formerly the frontman of indie-rock outfit Hefner, who released three albums worth of indie-rock in the mid to late 90s before trading guitars and record sales for synths and obscurity with their fourth, Table For One is Hayman’s debut solo album, a swirling narrative of social commentary, secret observations and stories of urban life; a niche in which he truly excels.

In a field where the linear, lowest common denominator fake-heartbreak falsetto pop of James Blunt and the morose, indie-by-numbers Richard Ashcroft are currently in favour, Table For One displays something which Darren Hayman’s counterparts sorely lack: imagination and eloquence. Each song here is about a different character, as Darren acts as a narrator to his characters’ social situations, inviting us to look inside their various psyches. “She feels the blood pump in her veins / Makes her feel she’s doing right for the first time in her life”, he reveals of his subject Christine, a “plucky” girl despondent over the attitudes of her friends in ‘The Protons and the Neutrons’. It’s the same kind of style Belle & Sebastian used to use most effectively in their ‘Dog On Wheels’ days, and if Hayman’s characters feel real it’s most likely a combination of the detail in which their thoughts are presented, and of how Hayman ties them back to the real world using staples of every day life. “She was kind of like a girl on the first day at work / In her neatly ironed Marks & Spencers' skirt”, comes the high-street observation in ‘That’s Not What She’s Like’, and whilst the sexual allusions of his Hefner days are absent, Hayman remains unafraid to resort to blunt colloquialisms to get a point across: “Son, you should be getting laid instead of playing bingo with me”, says middle aged Kathy to her son Trevor in opener ‘_Caravan Song’.

Considering the musical schizophrenia evident in Darren Hayman’s past, Table For One could have drawn from any number of genres, but nearly every track present is guitar-based and almost inevitably reminiscent of Hefner. If you’re a Hayman fan looking for a benchmark, the album as a whole has a feel akin to ‘_We Love the City’, Hefner’s third long-player. With the same arrangement of instruments - ukuleles, violins, mandolins and the steel-guitar-imitating B-Bender all help to expand the sound and add depth - it could easily pass as a direct successor to the aforementioned album. The glimpses of electronic wizardy within Table For One are used sparingly but to good effect, far more acceptable than the hotchpotch of electronic sounds which formed Hefner’s poorly received ‘Dead Media’. The programming, keyboards and samples on songs such as ‘The English Head’ and ‘The Protons and the Neutrons’ hark back to Hayman’s short-lived, now defunct electronica-based project The French, whilst Hayman’s recent embrace of bluegrass is evident in standout track ‘Perfect Homes’, with its country swing and lo-fi arrangement. This is folk music updated for the 21st Century, and when it works it does so with confidence, a swing in its step and a glint in its eye.

That isn’t to say that everything present here works; there are a couple of songs on here that should probably be no more than b-sides when compared with the high standards of the rest of Table For One such as the dull, slow and plodding ‘The National Canine Defence League’. Even our narrator cannot successfully pull off lines such as “A quarter Jack Russell / A quarter Beagle / A half Border Collie who won’t come to heel” and “He’s only fourteen / but that’s sixty in dog years” without sounding slightly ridiculous. ‘Doug Yule’s Velvet Underground’ is an equally uninspiring biographical tale, culminating in a slow, repeated chorus line of “_You’ve got to hold on with both hands” which never really gets going, as unchanging as the history it speaks of. Added to the garish keyboard introduction to The French-esque ‘Grey Hairs’, these are the only real slip-ups on an album which sees Darren Hayman in his best form for years. Let’s hope there’s more to come.

Bomb Factory, NeatPeople, The Rank Deluxe at On the Rocks, Hackney, Sat 28 Jan