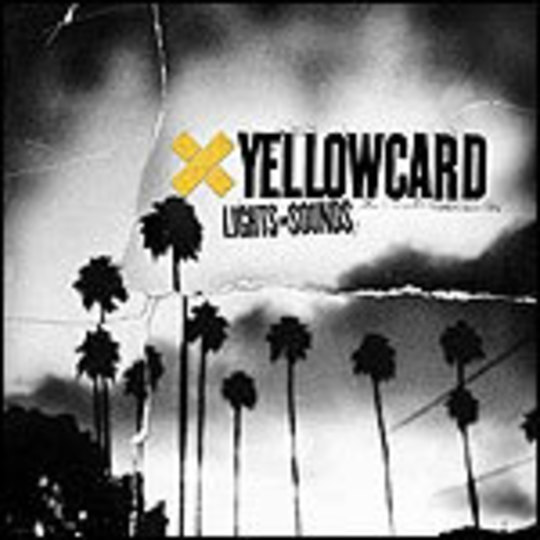 In the future, I see time when those of money and affluence who yearn for the adulation foisted on rock stars won’t have to bother with writing songs or hard graft on the gigging circuit. They’ll be able to enrol at the Simon Cowell Memorial Institution For Aspiring Starlets where, after an aptitude test, they’ll receive tutelage in playing instruments, vocal exercises and learn to dress stylistically in accordance with the genre of music to which they’ve been assigned.

Those who register for Pop-Punk 101 will receive Yellowcard’s Lights And Sounds as their first set-work; the Jacksonville quintet's new album would be the perfect teaching aid, as it's technically proficient while being boring and forgettable enough not to inspire the temptation to plagiarise.

Yellowcard fans are fond of pointing to the fact that the band has a violinist in its ranks as some sort of proof that they’re a major pioneering force in punk rock. That might’ve been true about four decades ago, but even people who have no interest in this genre will tell you that citing string arrangements in the odd song as 'innovative' is tantamount to calling a bloke a ladykiller if he has the sense not to light his own farts on a first date.

‘By-numbers’ is a hideously over-used term in music journalism, but it's an immaculate description of Lights And Sounds. Nearly every single standard in the pop-punk song-writing playbook makes an appearance somewhere on this record - bludgeoning intro followed by quiet reflective verses, muted guitars that suddenly leap out of the speakers, the wall-of-sound chorus – except for the one most crucial to the enduring appeal of any pop punk album: the 'pop' element. The melodies - which on previous Yellowcard albums were something of a strong point - are, for the most part, weak as shit. Those who prefer more punk than pop in their pop-punk cocktail should steer clear as well – none of the songs on this disc are any harder than 'Since You've Been Gone' by Kelly Clarkson.

The only track that makes any lasting impression is the album’s ultimate low point, 'Two Weeks From Twenty', a song so bad it may unintentionally be the most brilliant anti-war parody since Team America. It’s an acoustic number about a lad named Jimmy who isn’t really popular (no way!) and who enlists because all the factories in Jersey are closed (yes, this is in the song), and after a quick kiss from his sweetheart he goes to Iraq and (can you see it coming?) gets shot two weeks before his twentieth birthday. As bad as this sounds lyrically, it doesn’t really prepare you for the experience of actually listening to the monstrosity - its tinkly chorus and verses sound like they’ve been cut from two entirely different songs, and then bolted together to form some warped, drooling Frankenstein’s toddler with a bored Ryan Key droning over the top of it.

Aside from this one glaringly bad track, the rest of Lights And Sounds is a substandard, second-tier album with some strings thrown in for good measure. It's really not worth the money in your wallet - even if that wallet is attached to a very long chain.