Ballad Of The Broken Seas 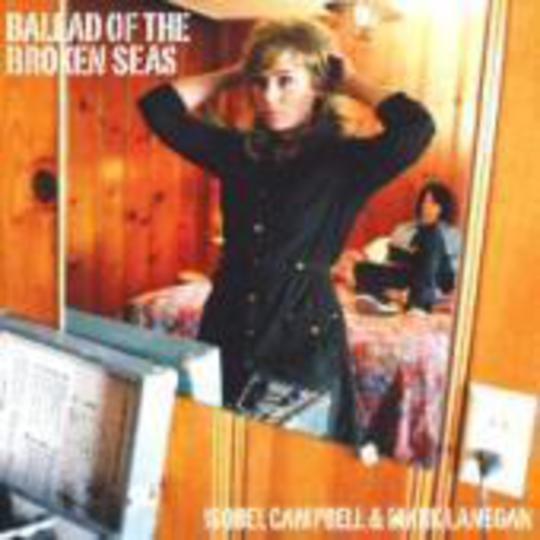 On paper it’s a potentially disastrous pairing: on one side of this five-inch plastic disc we have Campbell, twee scene pin-up and possessor of the most delicate voice this side of one of Heaven’s own chanteuses; Lanegan, meanwhile, is the Devil’s own baritone, voice hoarsened by a life spent chasing rats and dragons down gutters and alleyways, choking on the dust of a dozen near misses. One sits upright in the library, re-arranging the bird watching sub-section into species-specific order, small to large; one rests hunched upon a bar stool, gently cradling the last whiskey his coppers can buy, a cigarette burning itself out over an ashtray already brimming with spent butts. This shouldn’t work at all, right?

Well, it does: any fears of a dangerous liaison are soon sent packing as opener ‘Deus Ibi Est’ thud-thuds its way to attention, one kick drum and a simple acoustic guitar, one voice of gravel and glass. It’s the first of a good few songs that Lanegan dominates – although it’s Campbell’s name that appears first on the sleeve, don’t misunderstand such a billing to mean that she sings the lion’s lyrical share here. Regularly she’s reduced to little more than effectively sensual coos, Lanegan’s weathered chords assuming a central role in proceedings; that said, remember that Campbell wrote most of these songs individually, and note that she's done a sterling job. Nevertheless, the songs Campbell leads – ‘Black Mountain’, ‘Saturday’s Gone’ – while pretty, are the least memorable tunes here.

Trump cards slip from the pair’s collective sleeve with reassuring regularity, though (and it must be stressed that while Campbell’s next-to-solo efforts are the least interesting songs here, they’re in no way poor) – song three, ‘The False Husband’, is a wonderful duet, strings carving tiny nicks into the crisscrossing vocals, a hangman’s bell ringing out over a guitar of purest blues. Their take on Hank Williams’ ‘Ramblin’ Man’ is among Lanegan’s best contributions, but his most arresting performance is reserved for the album’s title track, a tale of two hearts at war and its effect on the bodies that house them: “I bring you a tale of the broken seas, and I’m drowning in whiskey and beer. My doctor reports that if I don’t stop soon, I’ll drown in an ocean of tears.” The man’s lost his lady, reconciliation should be so simple, but he’d rather drink his way to his maker. The cello that appears fifty-something seconds from fade is perhaps the most mournful moment of anything these twelve songs can offer.

The sole instrumental offering, ‘It’s Hard To Kill A Bad Thing’, is perhaps an unnecessary addition, and falling as it does at track nine of twelve only increases its awkwardness – better sequencing would have seen it moved to a more central position, neatly dividing the album into two chapters. Of the remaining standouts, ‘Honey What Can I Do?’ is a wonderful amalgamation of Yo La Tengo and The Delgados, summertime indie-pop at its most graceful and charming; ‘Dusty Wreath’ meanwhile – almost an instrumental save for some trademark oooh-ing and aaah-ing from Campbell, words not totally decipherable – is the middle ground between the closing seconds of a Gregor Fisher Hamlet cigars advertisement and “Dreams can come true, they can happen to you…” It doesn’t close the record, but perhaps it should, such is its bittersweet perfection.

It turns out the paper in question was but the cover, then, and everyone knows what you shouldn’t do with one of those.

Walk Into The Light And Reach For The Sky