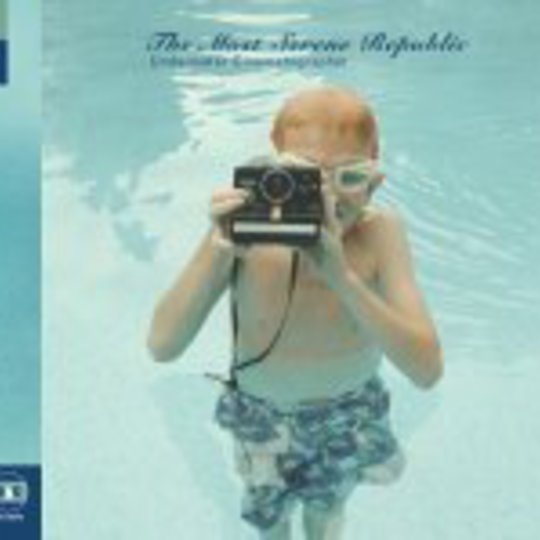 Listen with your mouth, taste with your ears: this is eighty menus in one, starters and mains overflowing from plates, covering the table before you in a banquet of treats, each one as wonderfully delectable as the next. Take a bite – one, two, chew, swallow – mixing the flavours: it shouldn’t work, but it does, and it’s so sweet.

Welcome to The Most Serene Republic’s debut album, eleven tracks of every song you’ve already experienced condensed into some wondrous concoction from a beautiful world, somewhere we yearn to live in but can only visit fleetingly, such are the demands of the nine-to-five grind. It’s the sort of record that has one forgetting oneself – one’s deadlines, train timetables, loved ones’ birthdays. It invites the listener inside, a cup of cocoa in one hand and a syringe full of something sparkling and silver in the other. Relax, lie back, receive the treatment; drift away magically.

Don’t play this record in public, through headphones: its multiple layers of dizzying delirium and chattering alien beats ‘n’ pieces will have even the most reserved of listener grabbing at the closest beautiful girl or boy, declaring their love for them and eloping to the Moon. There they’ll live together, forever, forever, on a diet of cuddles and cheese and packets of broken biscuits, every fractured Rich Tea shaping itself into a heart about ready for dunking.

A little back story, a little perspective, The Facts: The Most Serene Republic are six friends from Ontario; they’ve played in the UK alongside the acclaimed Broken Social Scene; and they’re ridiculously young still (too young, really, to already be making music full of such wonder). Underwater Cinematographer isn’t going to leap at you from store racks – its cover isn’t likely to be plastered with shiny special edition stickers or a slew of quotes from the monthlies; it’s meant to be a treasure hidden amongst fools gold, an album that only reveals its charms over considered listens experienced in isolation, a treat for which you’ll almost certainly have to endure tricks aplenty. If you’re looking for a hook to hang this technicolour dream coat upon, please refer to your collection of Death Cab For Cutie and Dismemberment Plan recordings – the brilliant jangle of ‘The Protagonist Suddenly Realises What He Must Do In The Middle Of Downtown Traffic, for example, spreads itself wide over both acts, sounding similar yet absolutely unique, drum beats dancing like fireflies and guitars swooning like a gangly teenager struck by a first crush.

So euphoric are the multiple highlights here that one can overlook the occasional dalliance with silliness: ‘Proposition 61’ is throat beat-boxing a la Björk’s Medulla with a northern exposure twist, indie-pop getting messily artsy and winding up forgetting why it bothered in the first place. But, ‘(Oh) God’, ‘Where Cedar Nouns And Adverbs Walk’, ‘King Of No One’… sublime, luscious, invigorating, uplifting, crushing, caressing, tingling, otherfuckingworldly amazing.

Underwater Cinematographer will, inevitably, attract favourable comparisons with recent records by its makers’ fellow countrymen – they need not be listed here such is their omnipresence in contemporary indie music circles – but not one of those already acclaimed albums has half the scope on show here. Six brains have conspired to craft a record that’s this close to being alive, so organic is the flow from song to song, so natural sounding are the swells and peaks and breaks. It’s the sea crashing against the most jagged of rocks: capture a still in your mind and hold it there, admiring its beauty, never noticing that several creatures from the deep were washed up with it, marooned, panting intoxicating air. Everywhere there’s sweetness there’s the sour: leave that feast before you alone for a night and the scavengers will pick it ‘til only bones remain. Expect immediate results from this record and expect to come away from it cold and unimpressed. Nurture it and be dumbstruck when you least expect it.

Texturally beauteous and boundary blurring in its ambition, Underwater Cinematographer is the soundtrack to a freeze-frame moment of unprecedented perfection that’s but seconds away, if you want it. Why not: clutch at that arm, hold him or her tight. You can let go, but for the moment, what bliss…