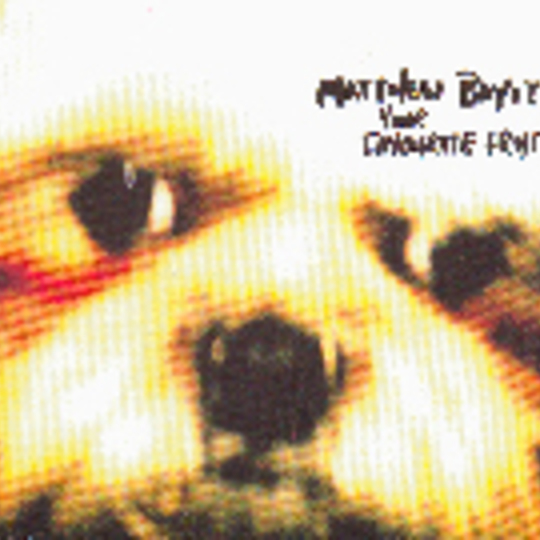 I expected to write something terrible about Matthew Bayot and his first release. Instead, but admittedly after more preview plays than I'd generally allow, I find myself engaged by the man's poised introspection.

It's all to easy to hear an apologetic vocalist in Bayot's school assembly vocals. He's not one to shout, and what does escape through the back door of his throat is easy to dismiss as just one more lazy lyricist hoping to be the latest Banhart (or was that Donovan?), with a fey interest in appearing weird and wonderful. Being described as a practitioner of Psych-Folk, doesn't help much either.

So left on repeat last week while labouring over the Sunday roast, I was surprised as little by little, my defensiveness began to melt under an array of apparently unperfected waffle to do with cats and tuna fish in the title track 'Your Favourite Fruit' and later, pelicans and amoeba.

The central of three songs is a vehicle for sitar - an unusual instrument for a St Louis native to excel in? (Maybe there's more to unravel here.) There are two mixes of the final, and best track 'Drowning'. The first is basic and demo-ish, but a shuffling, semi-Massive Attack groove on the second really sets some interesting discordant harmonies ablaze, and the addition of solid, wrought guitar work after the peerless Jason Molina (Songs:Ohia and Magnolia Electric Co.) offers a vital rise.

Rather than remaining manacled to my original post-ironic stance, I began to appreciate that the world indeed moves a little slower for Matthew Bayot and my choice was either to remain peering through the tinted glass, or dive into a refreshing pool.

So, with Yorkshires risen to perfection, nestling beside blushing succulent beef, an unusually unflustered hostess served perfectly cooked vegetables with a silken gravy.