Daft Punk Is Playing At My House 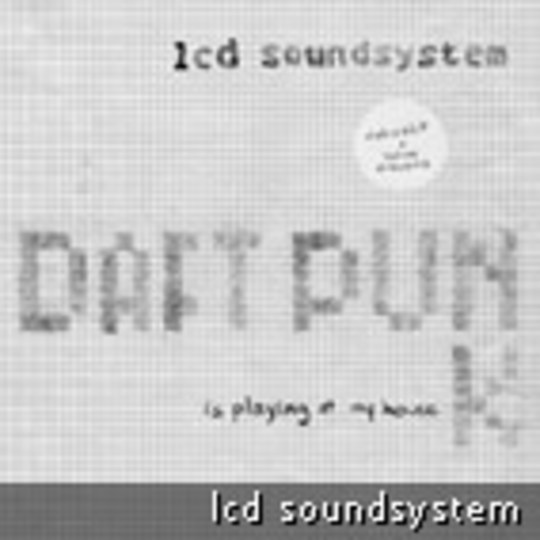 Ah, the adolescent dream. Boy buys guitar. Boy forms hardcore band. Boy meets other hardcore bands. Boy decides to have loads of hardcore bands playing in his basement and then get a megastar Gallic robo-disco duo to headline the whole shebang. Brilliant!

Brilliant for us too. While the idea of taping several PA systems together and earnestly putting Castor oil on the rider may only exist in James Murphy's dreams, his dreams have subsequently been filtered through his fingers and now become the stonking funk-fuelled fantasy of ‘Daft Punk Is Playing At My House’.

It seems Daft Punk are something of an inspiration to LCD Soundsystem, seeing as they also got a mention in finest hour ‘Losing My Edge’, the paranoid Murphy telling of how he was first to play such minimalist house music to the kids down CBGBs.

It’s also evident that a pre-mechanoid ‘Punk are an influence in the driving, looped, hypnotic basslines that would be screaming “party now” if they weren’t busy being so darn funk-ay.

Yet, LCD aren’t ones to trade on past bandwagons, whether theirs or the Franco droids’. ‘DPIPIMH’ shows a newer, more densely-layered LCD, pushing the idea of repeated lyrics into a nursery-rhyme like narrative, and presenting a more bright-eyed, bushy-tailed, frantically-optimistic side to the group (not to mention gleefully rebellious, Murphy exclaiming with a smile in his voice “The neighbours can’t call the police!”). The zeitgeist may have past but even a cowbell solo doesn’t make this slice of pipe-dream acid-pop seem like 'The Last Next Big Thing', more an excuse to dance ‘til you malfunction and remember why dreams are so important.

Not only that but they recruit rockers-come-DJ dicers Soulwax for remix duty, and although the ‘Shibuya Mix’ might sound like the Belgian brothers are trying even harder to recreate the first side of ‘Homework’ (particularly the police-meets-house-party imagery), the accentuated electro feel and use of the synth-led climax end up coming on like electroclash didn’t die and go to Hoxton. See, they do this sort of thing in Europe too.